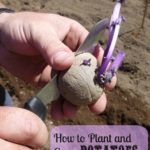 One of my favorite things about the pioneer lifestyle is growing our own food. But with recent biotech and GMO's sneaking into our food, it's not just about being frugal or the added health benefits (you did know home grown vegetables and fruits have more nutrients, right?), it's about protecting our families.

Until recently, there were no GMO potatoes on the market, but now the FDA is assessing a GMO potato bred by J.R. Simplot Co.

If you haven't grown potatoes, now might be the perfect time to start. Many of you know I'm a firm believer in growing heirloom plants, and the potato is no exception. We grow an heirloom potato called Purple Majesty. It has 10 times more anti-oxidants than a regular potato and the kids love the color. Lavender mashed potatoes anyone?

There's a few things you need to know when learning how to plant and grow potatoes.

1. Only plant seed potatoes. Potatoes you've purchased in the grocery store are not suitable for seed potatoes because they haven't been harvested that way. They also may have been sprayed with chemicals to keep them from sprouting on the shelf. Seed potatoes are chosen for their resistance to disease. Ever heard of the potato famine? Starting with disease free potatoes is key.

I know some people do plant potatoes they've purchased from the store once they've sprouted, but I'd rather not take the gamble of introducing any disease to my soil and don't think it's worth the risk. Each person must decide this for themselves.

2. Choose well draining soil acidic soil, that's been fertilized. Potatoes are heavy feeders. You don't want them to rot in the ground or develop a fungus. Never plant where you had tomatoes the previous year. Always rotate your potatoes each year.

3. Potatoes prefer cooler weather, and can be put in the ground as early as 2 weeks before your last frost date. They'll tolerate some heat, but if temps stay in the 90's or above for prolonged periods of time, they may die. Our summers are extremely mild in the Pacific Northwest, so I don't suffer from this. We plant ours the first to mid part of May.

4. Dig a trench about 4 to 6 inches deep. Place your cut potato with the eye facing upwards. Space 12 inches apart and cover with 2 inches of soil. After potatoes have sprouted, you'll need to mound soil around them. We have lots of slugs here, so I don't use mulch, just good old dirt.

5. Know when to mound your potato plants. Potatoes are produced from the tubers, and if left exposed to light, they'll turn green and poisonous. (Yes, this is true.) Mounding also helps inhibit blight. Mound the soil up once the foliage has reached about 8 inches high with a hoe. It's better to not mound the soil too steep, so it won't wash away in the rain. Mound up until only 2 inches of leaves are left showing.

6. Additional mounding of dirt should be done once you have new growth of about 4-6 inches. This will be repeated 3 to 4 times throughout the growing season.

If you don't have the garden space for potatoes, they make an excellent container crop. You simply fill with more dirt instead of mounding each time. I've seen pictures of people using large plastic laundry baskets.

What's your favorite kind of potato? Did you know new potatoes are just potatoes harvested before they're mature?