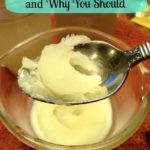 We practice many pioneering skills at our homestead, from butchering pigs, raising beef cattle and chickens (a proud flock of 6 laying hens), heirloom gardening and seed saving, with traditional cooking and meals, but before today I had never rendered lard.

Well, not in the traditional sense. I've saved bacon grease from the pan after cooking and poured it into a small jelly jar and stored it in the fridge. Which on a small scale is exactly what rendering lard is, but I've been wanting to do it on a larger scale for some time.

Last month when our local butcher came to butcher the cows, I asked him for the lard. He asked if I was making soap from it, and I told him I wanted it for cooking. He said pork lard is preferred for cooking, as beef is too strong for baking pastries. I was thrilled when he offered me some for free.

I picked up my eight pounds of pork fat and spent today rendering it down into lard. You may be wondering why I would want to render lard to use in cooking and baking. Despite popular myth, lard is not bad for you. It's actually a source of healthy fats when used in moderation. Much preferred to the GMO laden shortening and vegetable/canola oil found on store shelves. This article explains the top 3 reasons you should be using lard.

We'll be raising pigs again this spring and I'll be keeping all the fat from them, but this was an excellent way to get some now. I use organic butter and coconut oil when baking, but the cost of it can be expensive. The lard was free and after rendering down five pounds of it, I ended up with two pints and almost one full quart. Compared to the organic coconut oil, that's a savings of $20.

Plus, I love adding more lost traditions to our home. Now I can use my great-great-grandmother's cookbook and know how the recipes are supposed to taste with the lard. Want more old-fashioned tips and tutorials? Check out The Made-From-Scratch Life!

How to render lard

I used the slow cooker method to avoid grease splatter and tying up my stove top. Tuesday's are generally a busy day in my kitchen as it's my one day off from my day job during the week. I can pack almost a full week's worth of cooking into one day.

There are two types of lard. The lard around the kidneys and organs of the animal is referred to as leaf lard and is considered the purest form and best for baking. The other lard is the back fat of the animal. Mine was mixed together. But not to worry, there's a way to make it work for both baking and general cooking/frying.

Freeze the lard. When rendering lard, it's easiest to work with if you freeze it first. Allow it to partially thaw for about two hours on the kitchen counter.

Chop it up in 1 to 2 inch cubes. You need the pieces of fat to be uniform to avoid scorching and uneven cooking. You want it small to release the oils. Some people will ask the butcher to grind the fat up first, but beings I was receiving mine for free, I didn't ask. While chopping the lard, your knife and cutting board will become slick, use caution. (I'm typing this with a band-aid laden finger, take my word for it)

Put 1/4 cup water in the bottom of your slow cooker. As the fat is starting to melt, you don't want it scorch on the bottom. The water will cook off during the rendering.

Fill your slow cooker to the very top. The lard will cook down and you want to make your time count.

Cook on high for 45 minutes to 1 hour. Depending upon the temperature of your slow cooker's high setting, you'll want to get the lard heated. Once it starts to melt, turn down the slow cooker to low. My slow cooker tends to cook on the hot side, so I turned down mine to low and left the lid off for most of the rendering process.

Stir the lard every 20 minutes. You don't want the lard to scorch. After the liquid has reached the top of the lard, you're ready for the first rendering. Depending upon the amount of lard you're rendering, the time it takes for this happen will vary. I did four and half quarts at once and it took almost three hours for the first rendering. Place a strainer, or sieve, lined with a layer of cheese cloth over large bowl. Pour the rendered lard through. Put the contents of the strainer/sieve back in the slow cooker and continue cooking.

Allow the rendered lard to cool for approximately ten minutes. After lard has cooled, pour into washed and dried wide mouth mason jars. If you don't wait for the lard to cool a bit, you run the risk of cracking your glass mason jars. Let lard continue to cool to room temperature before putting on lids and placing in the fridge. Be sure to wipe down the outside of the jars to remove any grease residue.

Store your lard in the fridge. Lard should be fine on the shelf, but I prefer to store mine in the fridge to avoid any of that work turning rancid. It's good in the fridge for six months. The jars I'm not using go in the freezer where they'll stay good for at least a year.

Use your lard in place of shortenings, butters, and oils. I made my biscuits with lard and they were amazing! I can't wait to try pie crusts, as I've only heard tale that lard makes the best crusts you could ever imagine.

I was surprised at how far the lard rendered down. I went from a full slow cooker to a single cookie sheet of leftover cracklins. I baked them at 350 degrees for 20 minutes to use in place of bacon bits and as flavoring in beans and on top of soups. Store cooked cracklins in the freezer, if they're not all inhaled upon baking.

Have you ever used lard? Were you surprised about its health benefits?