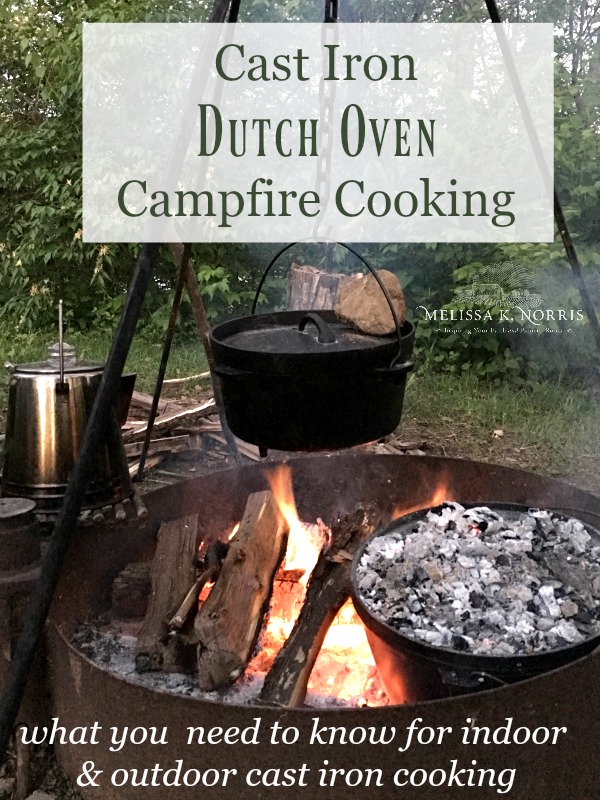 I’ve brought on Tracy Apperson, a wilderness guide and mentor and owner of Sparrow Rose Soap & Herbs. She admins several bushcraft & homesteading related groups, including Indiana Bushcrafters and Bushcraft LIVE. Tracy is one of the guest teachers within the Pioneering Today Academy and she does a lot of outdoor cast iron cooking. She actually has some tools including a piece of cast iron that has been in her husband’s family for five generations.

Listen below to, Cast Iron Dutch Oven Outdoor Campfire Cooking, Episode #156 of the Pioneering Today Podcast, where we teach families how to grow, preserve and cook their own food using old-fashioned skill sets and wisdom to create a natural self-sufficient home, with, or without, the homestead.

Get access to our Cast Iron & Outdoor Cooking e-course as a member of the Pioneering Today Academy  With your  membership you’ll get: 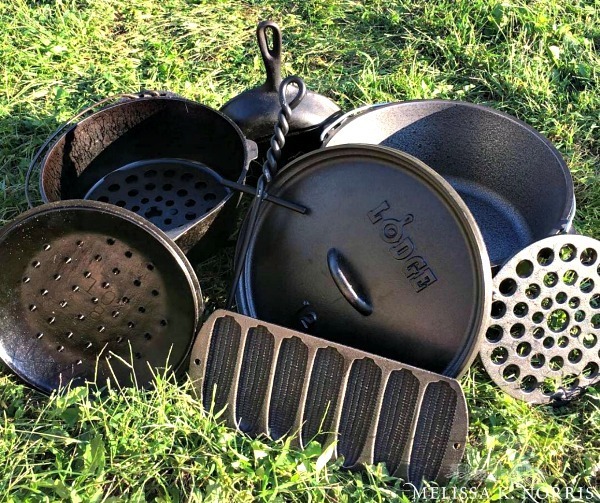 What is the versatility of cast iron?

Tracy:  There is a ton of versatility when cooking with cast iron.  It’s easy to take care of and you don’t get the hot spots when you’re cooking over a fire like when you’re using lighter weight materials and end up burning your food.  You can use Dutch ovens, drip drop roasters, a huge variety of skillets, trivets, lid lifters. There are also fire irons that can be used as a tripod and you can hang things over the fire. 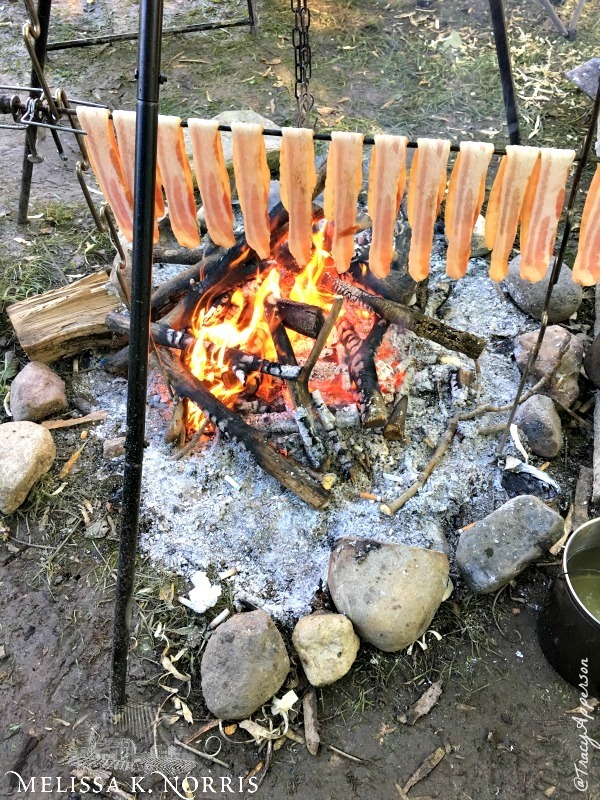 For example, cooking with bacon, you can put it on a grate and use skillets or you can hang the bacon directly on the crossbar of the tripod.  Clean up is also really easy in the field.

Melissa: I love the simplicity of it.   You can use it and do so many different things with it, from stove top, to outside, to in the oven.  I feel like it’s actually simplified down my kitchen just in the amount of stuff that I have to keep stock so that it’s more clutter free and basic without having the need to have all of those other things.

We loose power a lot and we’re kind of last priority as far as restoring power because there’s not as many customers. But I’ve been in the middle of mixing up biscuit dough and then the power goes out. We can just go and start up the Dutch oven and it doesn’t affect our food prep. I can still do all of my baking and all of my normal cooking that I would do with our regular electric oven, and I can do it outside or on the wood stove.

Also, when it’s hot out (as long as there’s not a full fire ban on, if you have an approved fire pit) then you can still cook in that. So even during the summer to help keep the house cool, I’ll use the cast iron and cook outside, as well as cast iron dutch oven camping trips.

How to take care of and season your cast iron.

Tracy: The seasoning that is on your cast iron is an accumulation of oil that has cooked onto the cast iron itself.  This oil provides a protective service against rust. It also helps make it nonstick and more easy to care for. If you use a soap that dissolves the oil, you are damaging your seasoning.

When finished cooking use a plastic scraper to get any residue off, if there’s nothing that’s stuck on, then it’s easy to just to wipe it out with a paper towel or a lint free cloth and then just put some oil on it.  Some people might think that’s kind of gross, but when you heat it back up, you’re sterilizing it anyway.

If you do remove the seasoning, you’ll have to re-season it, so you want to avoid that because it is a lot of work.  You also run the risk of having  it rust and other issues like sticking and things like that. If I wanted to use soap, I would use something that wouldn’t remove grease, like a really mild castile soap, and do that extremely sparingly and only if really needed.

Another easy way to get things that are stuck on is while it’s still hot, I add a little bit of warm water or a little bit of course salt, and you sort of rub that around in the coarse salt. Or if you’re in the woods, you can even use some sand.

I’ve seen a lot of people use chainmail kind of scrubbies on there, but I don’t recommend them, but steel wool seems to be fine.  You just don’t want to damage the seasoning on there because it’s somewhat labor intensive to fully re-season cast iron. So it’s best to just not damage the seasoning in the first place.

Melissa:  Exactly. I will run my tap water really, really hot and then use that really hot water and rinse it out. Otherwise, I’ve got a brush so I’ll use a little scrub brush without soap or I’ll use salt, and that works really well too.

I don’t really ever have to use the soap. If you use the soap very often, you’re constantly re-seasoning it.  People say “I want a really nonstick pan.” Well, if you’re taking care of your cast iron properly with the methods that we’ve been discussing, then you are going to be building up your seasoning without having to totally strip it, and avoid doing  an in depth re-seasoning every time  you use it. 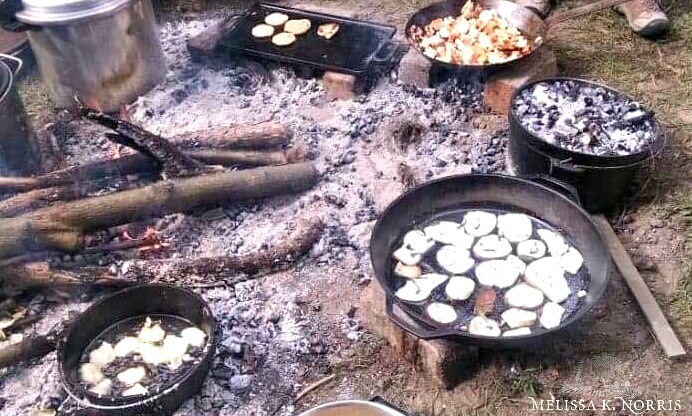 Rocks are a wonderful way to support lids and things like that, but please don’t use river rock. If there’s moisture in the rock and you put it in a fire, it actually could explode when it heats. -Tracy

When baking  in a Dutch oven, you need to use coals or embers.  You need to have more on top of the lid than underneath so you have even heating and you’re not burning the bottom while the top isn’t getting done.

For example, when I’m using six or eight quart, I might have the equivalent of maybe six briquette size pieces underneath and maybe a dozen on top. Try to be aware of where the heat is (the embers glowing) and every 15 minutes the oven about a quarter turn so that you’re keeping the heat more even. That way, you don’t have any spots that are getting done before the other.

What are some must need accessories for Dutch oven campfire cooking?

A lot of women say they have a shoe addiction. Not this girl. Mine’s totally Dutch oven and cast iron cooking appliances. -Melissa

Cast iron does take time to cool off, be aware of that with young children around. -Tracy 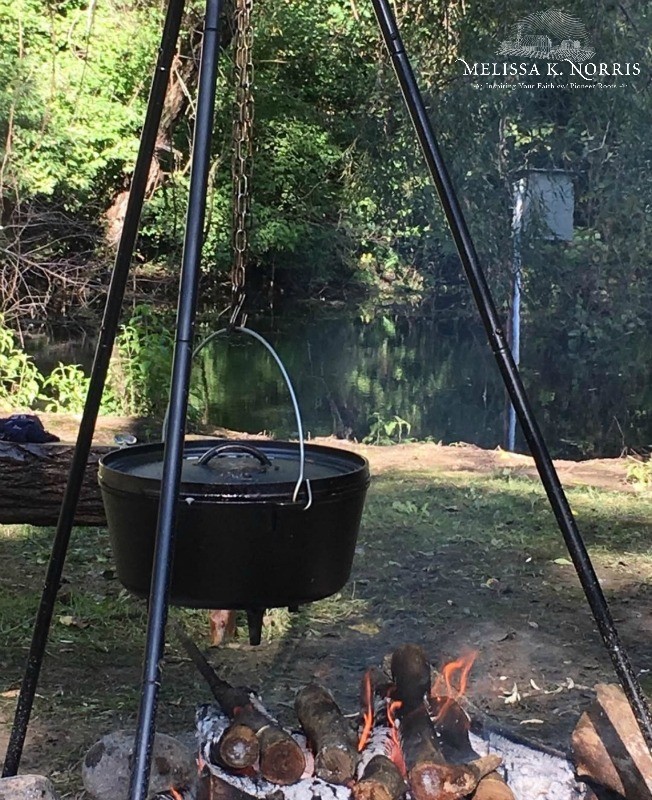 Cooking with a tripod.

Melissa: Okay, so talk to me about the tripod, how you use that the most, and what you would be looking for if you’re looking to purchase one or have one made. Walk me through that because that’s not a piece that I have, but it’s one that I’m highly interested in getting. So I kind of want to pick your brain. This is for me right now. 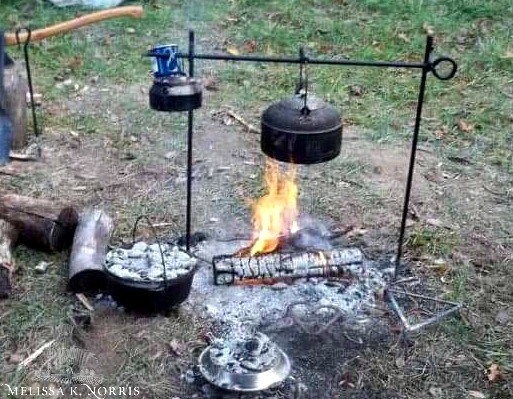 Tracy: The set that we have is actually a set of fire irons that was made by a blacksmith that is no longer making items. But it’s three pieces, and you can hook them together at the top to form a tripod, which then you can hang things from either by that four in one thing, or by a chain, or you can set them up so that it’s two uprights and a bar that goes across. And then you can hang things from that, which is really nice if you’re going to hang more than one item on that.

Tracy: For baking, it’s much better to put it in the coals because you do need to put coals on top or you won’t get an even bake.  But if I were going to hang something, that would be real common for things like soups, stews, chili, things that don’t need to be directly on the fire to bake.  It’s also good for keeping things warm and not burning it on the fire. There’s a piece called a trammel that’s like a hook that helps to adjust the height of the chain so you can adjust the cast iron according to the height of the flame or the coal.

With fire irons or a tripod, taller is better because it gives you more versatility. You can always lower it, but you can only raise it as high as the height of your tripod.  And get something sturdy because if you’ve got a heavy empty Dutch oven, and then when you fill them, they’re going to be even heavier. The last thing you want to do is to have the thing collapse on you.

It’s also handy because you don’t need a grate.  It’s easier to add stuff to the fire without having to move the grate or move the pots to put the fuel on and then put them back down because you could just adjust it.

Melissa:  There is a special element when you do prepare it outside over that open fire. I don’t know if it’s possible for it to taste any different, but I swear food tastes better in a cast iron, and it tastes better when you’ve cooked it outdoors too.  Tracey, thank you so much for coming on today. I am so thrilled that you’re going to be a guest teacher for us, and I can’t wait to dive into those lessons on using a cast iron Dutch oven over an open wood campfire. 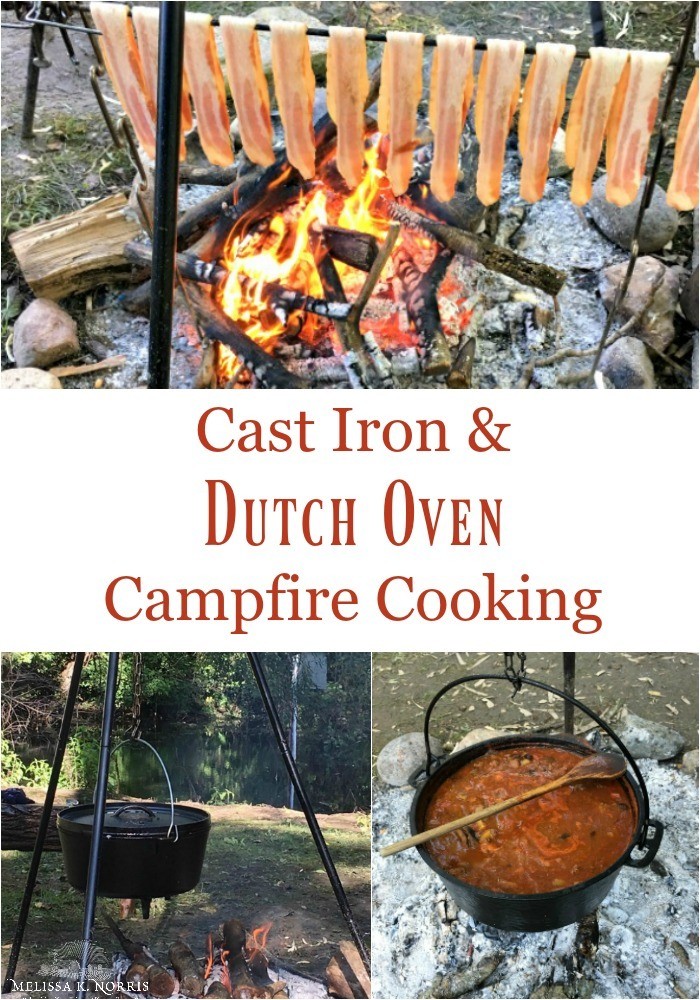 6 Health Benefits of Mushrooms You Need to Know