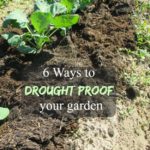 If you’re like me, this is not a happy thought…looking forward to a drought. But then again, having one facing you when you haven’t prepared for it would be far worse so here we go!

Drought conditions arise when an area is subject to a deficiency in water supply over an extended period of time. In the United States since 2012 much of the country has been suffering from at least moderate drought. If you live in the western United States this is currently a real concern.

1. Soil – The type of soil you have in your garden spot is one of the most important aspects of determining how much your garden is going to suffer from the extreme heat and dry conditions you are facing. And although you might not be able to change the type of soil you have in a big hurry, just knowing what your soil type is and how it reacts to drought will be a help to you. The healthier your garden soil, the more drought resistant it will be.

Sand: Sandy soil has larger particles of soil. It feels gritty to the touch. It warms up quickly in the spring and has the best drainage of any soil types. The problem with straight sandy soil is that the drainage is so good that the water will go right through it.

Silt: Silt has smaller particles of soil than sand. It feels slick to the touch. It holds water well so it doesn’t have very good drainage and is colder than sandy soil. It packs easily so it doesn’t aerate well.

Clay: Clay soil has even smaller particles than silty soil. Because of this, it holds water and nutrients the best. Clay feels sticky to the touch. Clay soil takes a very long time to warm up in the spring. The particles are so tiny that they pack together very tightly and then when they dry out the soil is ‘stuck’ together, making working dry soil very difficult.

How to tell what type of soil you have: Take a handful of soil, moisten it and pack it into a ball. If a ball will not form, but the soil falls loosely into your palm, then you have sandy soil. If a ball forms easily and stays in perfect shape, then you have clay soil. If you have silty soil, you will be able to form a ball, but a lot of the soil will be stuck to your hand and will leave your fingers dirty.

Loam: Loam is not a soil type but a combination of the three above soils. This is a gardener’s dream. Loam also contains humus which is decomposed organic matter. Humus is extremely valuable during drought conditions as it will hold the moisture a long time close to the roots where it is needed. In addition to this, because of the aerating properties, if a small amount of moisture is added to the top of the soil, it is quickly absorbed into the humus and retained there. Loam is dark in color and feels partly sticky, partly gritty due to its combination of soils. When doing the ball-test, loam will form a ball, but then as you open your hand the ball will fall into chunks due to the mixture.

2. Mulching – Mulching your garden is probably the biggest help you can give to your garden if you are facing a drought. Mulch can be organic or inorganic, but is basically placing a layer of something on top of the soil to protect the soil from drying out and to protect the root area from the temperature of the air. It also helps prevent weed growth and can protect against erosion. Do not be stingy with the mulch…the deeper the better. Also organic matter added to your soil will give great benefit toward water retention.

The insulating qualities of mulch keep the hot scorching temperatures of a drought from damaging the roots of your plants and also slows down moisture evaporation from the soil surface. Organic mulches absorb moisture quickly and retain it longer than soil that has not been mulched.
Mulch is generally put on the plants from 2-6 inches deep. The smaller the particles of mulch, the shallower you can put it on. Larger pieces like branches or twigs should be put on deeper.

3. Weeding -Weed with care during a drought. Use of pesticides and herbicides are hard on the plants and require more water for the plants to remain healthy. Try to avoid using these in your garden during a drought. Although the weeds take valuable water and nutrients that are needed for your plants, I think you should be careful with your weeding.

I have noticed that a few tall weeds can help shade the plants. At times of severe drought you may want to wait until a cooler day to pull those last few weeds.

As I was walking through a friend’s garden recently on a scorching hot 109 degree day, I noticed her garlic patch. The half that she had recently completely weeded were turning brown and curling up. The half that she hadn’t weeded yet, had several tall weeds around each garlic plant. The weeds were taller than the garlic, but weren’t crowded enough to give much harm, and I could tell were actually aiding the plants by shading them. In this section, the garlic was still green and standing up tall and the heat didn’t seem to be bothering them. The watering was equal throughout the patch. I think it is a lot like spring transplanting, the disturbance of the roots at transplanting time calls for a cool shady day to prevent damage, much like the disturbance of these garlic roots when these were weeded during a drought.

4. Water – Mulching is a huge help to retain water in the soil, but you will still need to add water if it hasn’t rained in a long time. Putting the water beneath the mulch is the very best if you can. With a drip irrigation system this is easier to do.

If your plants have been deprived of water for a long time, they will wilt, and even if they don’t die, they will be unproductive because they are starving for water. Watering less frequently and deeper is the best way to water. The water reaches down to where the roots are and encourages deep root growth.

If you water often and shallow, then the roots will stay near the surface, which is very dangerous for the plants during drought. With proper maintenance, a drip irrigation system is one of the best things you can do for your garden to prepare for a drought year.

Overhead watering will allow more water loss through evaporation, as will watering during the heat of the day. Evening watering is considered the optimum time to water during a drought. With all of your plants, it is best to wait until the plants are close to the wilting stage before you water them to encourage deep root development. If they are in the flowering or fruiting stage, it is important that you don’t let them become too dry.

5. Shade – Have you noticed that the part of your lawn that remains green the longest when the summer sun is scorching everything else, is the section that has shade during parts of the day. If you have areas of your garden with no shade, you can provide artificial shade.

The type of shade cloths that are used for dog kennels would work quite well. This burlap shade cloth works well with multiple garden uses. We don’t always know ahead of time if it’s going to be a drought year. Long narrow rows of vegetables look neat and tidy, but they are much more susceptible to harm by drought than wide rows or blocks of vegetables.

Blocks or wide-rows tend to shade themselves once the plants are a bit larger and this also cuts down on weeding. The shade helps preserve the available moisture.

Another planting arrangement that may help a lot is knows as “the three sisters” Corn, Squash and Beans. These three plants can be planted together in the same area as a way to use the soil more efficiently. Corn sends its roots deep into the soil, beans send their roots out wide and shallow and the squash roots are in between. This way the water and nutrients in the entire area are well used and not wasted. Other plants can be placed together in the same manner.

However we do know that some plants fair much better than others during a drought, and you may want to consider just which plants you should be spending all your time and money on.

Beans (choose chickpea, limas or moth beans) Eggplant, Okra, Peppers (varieties that produce smaller fruits will bear the heat better) Cucumbers, Squash, Pumpkin, Swiss chard, Roma Tomatoes, Melons, Mustard Greens and both rhubarb and asparagus if they are established before the drought comes. Potatoes are a dry-land crop and require little water after they are first established well.

Many Heirloom varieties from the Mediterranean area are prized for their drought tolerance, like these blueberry seeds.

If you’re trying to decide between two varieties of the same vegetable, choose the plants with the smallest leaves. Varieties with extra large leaves tend to lose water into the air sooner than the smaller leaved varieties.

Plants you ought to avoid if you are planting a drought tolerant garden:

Corn, although it can tolerate the heat, it does suck up a lot of water, so if you are going to be low on water, you might as well skip it. Unless you can find Black Aztec Corn , which will do well with the drought. Prepare it by roasting the kernels.

Other vegetables that don’t do well in a drought are peas, lentils, brussel sprouts, cabbage, broccoli, cauliflower, turnips and watercress.

Shallow rooted greens will also die in severe drought. Greens can easily be grown in pots though, so if you love the shallow-rooted greens like lettuce you can pot them and move to a shadier, cooler location. If your garden is already growing and showing signs of stress, you may want to concentrate on the varieties that are more resistant to drought.
Again here is a list of some items that can greatly benefit your garden during a drought.