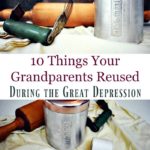 Life can be tough nowadays, but most of us are lucky enough to have never known true hardship: the type that our grandparents and great grandparents faced during the years of the Great Depression. But despite how hard life was back then, where there was a will, there was almost always a way.

So many people suffered extreme financial hardship during the Great Depression of the 1930s, and in turn that led to some pretty extreme frugality. The phrase “use it up, wear it out, make do or do without” was popularized during this era, and for good reason.

People had to get creative to make ends meet, and one of the ways they did this was by saving, reusing and repurposing absolutely everything. What we wouldn't think twice about tossing today was as good as gold back then.

The most valuable items were, well, pretty much anything. But in general, the more uses you could get from a single item, the more valuable it was.

What did people reuse during the Great Depression?

Everything was reused, recycled and repurposed. Here are just a few of the many things people reused during the Great Depression:

We'll go into all of these in more detail below, but suffice it to say that the more life you could squeeze out of each item, the more money you hopefully wouldn't have to spend.

This period in history stayed with the people who were affected by it too. My great grandmother lived through the Great Depression and she saved everything her entire life: plastic, aluminum foil, twist ties, jars and containers… She was even known for rationing her toilet paper!

And she kept her savings in paint tins in the basement. Nobody trusted the banks after the crash of 1929 threw the country into an economic collapse, and understandably so.

Many folks did have their money in the bank, however, and when the stock market crashed they lost everything. Millionaires went broke overnight. And of course, the poor got poorer.

Without any money to depend on, people had to become very resourceful. Finding creative ways to reuse and repurpose everyday items became a life skill that sometimes even meant the difference between life and death, and could even be exchanged as a currency in the trade and barter system that emerged when money all but ceased to exist for many people.

So what exactly did people save, and how exactly did they repurpose the scraps that could no longer be used? The list is extensive. Pretty much anything that people got their hands on was put to good use over and over again. But there are a few common items that many people saved, and many innovative ways they were used. Here are 10 common items people reused during the Great Depression:

Clothing was worn until it was down to the bare threads. The same went for linens and towels. Then, if there was fabric that could be salvaged, it was repurposed into new clothes or linens or washcloths or rags. Rags were then used as-is or they were patched together to make new clothes or linens or turned into rag rugs. Socks were also saved and repaired. Everybody darned their socks back then, which is difficult today because most socks are made out of synthetic material and don’t hold the stitch.

Flour and grain sacks were also very versatile during the Depression. They were made of cotton and some even had nice prints and patterns on them, which made excellent fabric to make new clothes out of. The “flour sack dress” was popular during the 1930s, but the fabric was used to make everything from dresses, shirts and pants to linens, patches, aprons and even underwear and diapers.

The rubber from tires was used in a variety of different ways. It could be used to patch soles on worn-out shoes, scraps could be used in home garden beds, and it could be used as a construction material in the “Hooverville” shanty towns that popped up when people began losing their homes. (They were called “Hoovervilles” after President Hoover who was in power at the time, and the ramshackle shelters in these olden day tent cities were pieced together with whatever scraps people could find, including cardboard, tires and even newspaper). In desperate situations, tires were also be used as fuel and burned to keep warm, despite the incredibly hazardous black smoke that’s emitted from burning rubber.

We modern homesteaders joke about the amount of Mason jars we keep on our shelves and in our basements and, generally, in every nook and cranny of our house. I know I can personally say that we reuse Mason jars for every conceivable purpose around our house! So it’s no surprise that glass jars and tins and containers of all sorts were never thrown out or discarded during the Depression.

Jars could be used to store food, collect kitchen grease or hold any number of household items from buttons to rubber bands. Tin cookie tins were often repurposed as lunch boxes for children and for lucky men who still had jobs (albeit with meagre wages), and for those out pounding the pavement trying to find one.

Everything was used to the very last drop, and that included things like soap and candles. Odds and ends were saved from bar soaps and wax candles and were collected and remelted to make new candles and new soap. And every last drop of liquid soap was used up and diluted with water to last longer. This was an effective way to stretch a buck that is still popular with some people today.

Every piece of string and elastic band was saved (in one of those repurposed jars) in case it was needed in place of new thread to mend clothes or to stitch or tie any number of things together. Likewise, rubber bands were hoarded and used to repair items, hold things together and to make the popular rubber-band guns, a children’s toy made from a clothespin, a piece of wood and a rubber band which kids would shoot at each other when playing games.

In a day and age when clothing was handmade even without the economic collapse, buttons may as well have been gold coins. Every extra button was saved and used to mend old clothing that was missing buttons and to add to newly sewn items. They could also be used as game pieces and Bingo markers (a game that also became popular during the 1930s and was also known as “Beano” because participants often used beans as markers for their Bingo cards.

Every scrap of paper and paper product was saved during the Depression. Cardboard and magazines and stacks of newspapers were even used as building materials in pop-up shantytowns! My mother has even told me stories that my great grandmother told her about using magazines and newsprint as toilet paper in the outhouse during those times (perhaps this explains her toilet paper rationing later in life).

Paper bags were also saved. Scraps were used as writing paper and parcel-wrapping paper and were even turned into little hand-sewn notebooks that could be gifted to children at Christmas time. Another story I read was of a woman whose mother saved magazines and paper scraps and made papier mâché, which she then used to make picture frames! Talk about resourcefulness. If nothing else, paper could always be burned for fuel or to start fires, which was a much better option than tire fires.

Of all the places in the house, the kitchen was the last place that saw anything go to waste. Everything was reused in the kitchen. Every eggshell, chicken bone, end of stale bread and jar of lard or grease was put to good use in some way. Likewise, parts of animals that we don’t normally use or eat nowadays were put to good use: Chicken feet were turned into soup, innards and gizzards were gobbled up and feathers were used to make pillows and bedding.

Water was also a commodity (probably the most important one of all) that many people didn’t have access to during the Great Depression. In cities, people couldn’t afford to pay their water bills, which meant their water was shut off. Or worse, they couldn’t afford to keep their homes, so they ended up in a shanty town without water.

But water was never more scarce than it was for people in the drought-ridden dustbowl areas of the U.S. where all the wells were dried up. Any water that could be reused was. Multiple people bathed in the same water and then cleaned their clothes and their dishes in it too. The old saying “don’t throw the baby out with the bathwater” would have definitely applied during this time.

What can we learn from the Great Depression?

Today we live in a throwaway, consumer society where we produce more waste and waste more money than ever before, money we often don’t even have to begin with. People living through the Depression would be been horrified at the amount we throw away nowadays!

Now, I’m not saying you should hang onto everything that comes through your door. In fact, I hate hanging onto anything that I don’t use. Clutter is a huge source of anxiety for me and I love only having a few useful items and creature comforts around me if I can. But I also believe in living frugally, within our means and preparing for whatever the future may hold, because you never know what tomorrow will bring.

Nobody knows this better than those men and women who lived through the Great Depression. The lessons of that time have stuck with many of them for their entire lives. In some cases, the lessons have been passed down through generations. But we’re beginning to forget, and when we forget the lessons we learned in the past, history is doomed to repeat itself.

Luckily, as modern-day homesteaders, we generally still live by the most important rules of the Great Depression: Use it up, wear it out, make do or do without. And always be grateful for every little thing.

What do you reuse or repurpose in your house? What frugal rules or habits do you live by? Leave a comment below and let me know!

More Articles on the Great Depression