Do you ever get a hankering for something different, something yummy, something simple, but oh so good you'll immediately eat the first batch and then whip another? Oh, and it absolutely must be frugal, real food ingredients, easy, and be so scrumptious your picky eaters will ask for second. You do? Awesome, because I've got just that very recipe on how to make homemade Indian fry bread.

Be warned, you may want to make two batches at once or double the recipe.

I've heard rumors of Indian fry bread. How it makes the best tacos and puts those elephant ears at fairs to shame. But I'd never had it before. And what's a pioneering today mamma to do? Make up a batch of homemade Indian fry bread herself, that's what.

I went recipe hunting. Which let me tell you, there were many to choose from. My criteria was it had to be as close to traditional ingredients as I could find. A lot of recipes called for powdered milk, shortening (we do not use shortening at our home) and yeast.

Store bought yeast in the little packages has only been around since the 1940's, not what I'd call a traditional ingredient in this form. We don't use GMO and hydrogenated fats in our home, so any shortening recipes were kaput. Most folks don't make homemade powdered milk and I happen to like fresh ingredients. That took a lot of options off the farm table.

In fact, I didn't find a single recipe for homemade Indian fry bread that didn't need some tinkering or another, so I basically invented my own. I linked to the one I stayed the closest to below.

We've been doing our best to cook from our pantry. We went four weeks with only one grocery store run, excluding fresh milk. It's changed the way I cook and some of the meals I prepare. It was also great for our budget. I wanted to make tacos and we ended up going a vegetarian route to use up the fresh veggies from the garden. I made these homemade refried beans from our home shelled and canned beans, homemade salsa, a bit of cheese, homemade guacamole, and a bit of ranch dressing.

I wanted a savory fry bread for the tacos so I used some cornmeal with the flour. Traditionally, people could grow their own corn and make cornmeal easier than wheat. Cornmeal is a great way to stretch your flour and also what my grandmother used a lot of during the Great Depression. You'll want to catch our Building a Great Depression Era Pantry for more frugal tips.

Mix together the dry ingredients.

Add in the water just until the dough holds together.

Pour in a touch more water if it's too dry. You don't want to over stir or knead the fry bread dough. Let the dough rest for about a half hour.

Heat up your oil in a cast iron skillet. I'd heard tale you can tell if it's hot and ready to fry by putting a wooden spoon in the oil. If it bubbles you're ready to start cooking and it completely worked! Here's 3 other ways to test if your oil is hot enough.

Using your hands, pinch off a piece of dough and roll into a ball.

Flatten dough on a lightly floured counter and using your fingers, push, pull, and mold it into a lumpy circle. I love this because it looks old-fashioned and doesn't matter if I get it to a perfect thinness. Hear that pie crust and tortillas? Rustic is the new home bakers best friend.

Careful of grease splatters, add your dough to the oil. It should bubble when the dough hits the oil. Allow to fry for about 2 to 3 minutes until it starts to turn golden brown. Flip and allow to finish cooking.

Place on a plate with an absorbent towel and continue adding layers of freshly cooked fry bread.

Pile on your favorite toppings and dig in. I couldn't resist and ate one piece without toppings while the rest were cooking. It started out as one of those just a pinch things and then pretty soon I'd pinched the whole piece of fry bread right into my mouth. Ever have that happen? I can eat a whole cake a pinch at a time…

One of the things we all noticed was how filling this was. Usually, I'm a two kind of taco girl, but one homemade Indian fry bread taco completely filled me up.

The next day I still had toppings, but we'd inhaled all of the homemade Indian fry bread the night before.

I decided to make another batch, but this time, I wanted some homemade Indian Fry Bread for a sweet treat. Like drizzled in honey and sprinkled with cinnamon kind of treat. Don't those pockets of golden honey make you want to dive in face first? I could almost lick the computer screen staring at it, but totally wouldn't, because that would be gross.

I decided to use all flour and try some buttermilk, because buttermilk is my secret weapon to perfect baked goodness. Seriously, buttermilk does something magic to bread, biscuits, peach muffins, and homemade fry bread. Just trust me.

The second batch got to rest for about 5 hours… it was a busy day in the garden and they were going to be a snack but ended up being dinner… I so love a recipe that allows for busy forgetfulness. Because please tell me I'm not the only one who forgets things sitting on the counter?

Verdict, they were both amazing, as in declared by my husband, “Our new favorite recipe!” I couldn't tell that much of a difference between the two recipes in terms of overall softness, so if you don't have buttermilk I'd go ahead and use water, but the buttermilk did make them a bit lighter.

I also re-used the coconut oil and then drained it into a wide mouth Mason jar to use for frying again. I see no reason to toss out oil that's just had a bit of bread fried in it. I really wanted to fry them in lard, but I have to render more down when the pigs get butchered this Friday.

For my diary free peeps, you'll want to use this version. 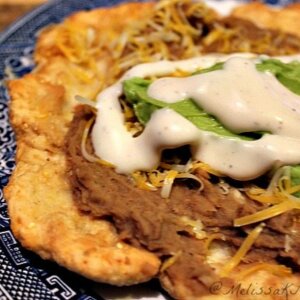 Tried this recipe?Let us know how it was!

This is the best version if your sweet tooth is kicking in and you're saying give me the honey!

3 cups flour, your choice spelt, whole wheat, or organic all purpose. If using spelt flour increase to 3 and 3/4 cups

Mix dry ingredients together. Add in buttermilk and stir until just combined. Add water if needed. Let sit for up to 6 hours, but at least 30 minutes. Form into 6 balls of dough. On a lightly floured surface, flatten the dough ball with the palm of your hand. Form into a rustic circle. Fry in hot oil for about 2 to 3 minutes each side until golden brown. Dry on a plate lined with an absorbent towel.

Sprinkle with cinnamon, a touch of sugar if you want, and drizzle liberally with honey.

Have you ever made homemade Indian Fry Bread? What's your favorite way to top it?