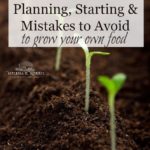 The Ultimate Seed Starting Guide- planning, starting, and mistakes to avoid to successfully grow your own food. Never ask again why did my seedlings die? What seeds should I start? Do I have to have a grow light?

Seriously, when done right, seed starting can be an amazing way to increase the amount of crops you can grow and your growing season, but not all seeds should be started indoors and there's many mistakes that can easily be avoided if you simply know ahead of time. That my friends, is where I come in, because I want you to harvest bushels of food this year.

Below is Episode #130 of the Pioneering Today Podcast, The Ultimate Seed Starting Guide- Planning, Starting & Mistakes to Avoid, where we teach families how to grow, preserve and cook their own food using old-fashioned skill sets and wisdom to create a natural self-sufficient home.

It's important to note that even with knowing your gardening zone and general rule of thumb on your first and last average frost dates, there are always micro-climates in regions.

For example: According to the data I'm in gardening zone 7B and my last average frost date is April 29th and first is October 14th (click here to find yours here by your zip code)

But, I live up in the foothills and we have a bit more extreme temperatures, which means we'll have a sneak frost sometimes come in as early as September 20th and we never plant our warm weather plants out in the spring until May 20th or later (depending upon the weather that year).

Talk to local gardeners in your area to find out when they plant, but the average frost dates and gardening zone give you a good rule of thumb.

Not all plants should be started early in doors. It's more work to start plants indoors than using the direct sow method of plopping your seeds in the dirt and letting nature take care of it.

Direct sowing means you're putting the seed directly in the ground in it's permanent growing spot outdoors.

Which seeds should I start early indoors

The seeds you start indoors will depend upon your zone and window of warm weather crops. If you have a really long growing period, then you may be able to direct sow all of your plants.

These crops are generally the ones you'll want to start indoors and early:

Plants started indoors are ones that have a longer growing season before you get your harvest. If you want to start onions from seeds and not purchase onion sets, you'll need to start them first, 10 weeks before your last average frost date.

Pepper and tomatoes are about 4 to 8 weeks before your last average frost, if you live where it's cooler, I recommend 8 weeks. 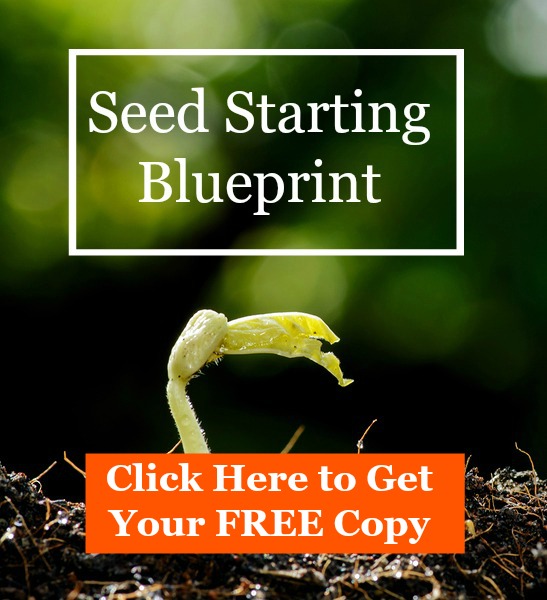 If you're like me, with a more limited time window, you will either need to buy starts or seed start indoors your tomatoes and peppers.

Resources for Seed Starting at Home

This is the grow light I've used for over 6+ years including the original bulb! 4′ Growlight

Young plants are just like infants, they're more susceptible to disease and getting sick. If you use dirt straight of your garden you're introducing any disease, bacteria or fungus that's in that soil to a baby without a immune system. This is often the cause of dampening off (a form of blight on seedlings) one of the biggest culprits of why seedlings die.

You're also bringing insects and their eggs into the house or gardening shed. Which you don't want on your baby seedlings or flying and crawling about your living room (which is where I seed start).

Here are your solutions:

Seed Starting Mistake #2 Your Soil is Too Cold

For warm weather crops your soil must be at least 60 degrees Fahrenheit or warmer for the seeds to germinate. General rule of thumb is between 60 to 70 degrees, though your hot peppers may need to be 75+ for best germination rates.

You can use a soil thermometer or go by the average temperature in your home. I don't use seedling mats or hot pads and the temperature in our living room is usually 65 to 75 degrees (cooler in early morning before the fire is built back up) and I haven't had an ounce of problem getting my seeds to germinate.

I have in depth lessons covering seed starting, containers, hardening off and transplanting in The Pioneering Today Academy.

If your plants are leggy, they're not receiving enough light.

You have two options for light:

For most people, especially if you live in a northern climate, a sunny windowsill will not provide enough hours of daylight for your plants. You'll need 6 to 8 hours of direct sunlight for plants a day.

If you're using artificial light, which is what I do, then you'll need 16 to 18 hours of artificial light (under your grow light).  I turn mine on when I get up, first thing in the morning, and off when I go to bed. I've had this same grow light for six years, including the same bulbs click here –>my favorite growlight

If you're plants are leggy, they're straining for more light and you need to deliver it as soon as possible to avoid week stemmed plants that will/can break when put outdoors.

Many people start seeds indoors but when they go to plant them outdoors they die. There are two reasons for this and we'll cover hardening off in tip #5, but the other reason is you haven't toughened up your plants.

In nature seedlings have rain hitting them, wind is blowing them around, there is movement. This helps the stem and the roots go deep. It develops a strong plant. Like working out, your  muscles don't grow unless they're forced to work and move against something.

Seed Starting Mistake #5 Not Hardening Off Your Seedlings

This is where I see many people make the biggest mistake with their seedlings. They don't harden them off properly or for long enough.

If you take your plants from the protected and controlled environment of indoors or the greenhouse and plop them outdoors, you're going to put them into shock and most likely kill all of them.

Pick a sheltered spot outdoors– start somewhere that's not in direct hot sunlight and isn't out in the open where they'll be whipped by the wind and elements.

Begin at least 1 week in advance before planting.

11shares
FYI, we use cookies on this website. If you're okay with that, you don't need to do a thing! Just click "Ok" and keep browsing.Ok