Some of the links below are affiliate links, which means I will earn a commission at no additional cost to you, if you click through and make a purchase. Regardless, I only link to products we use on our homestead or believe in.
Jump to RecipePrint RecipeJump to Video 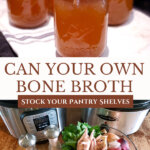 Learning how to make and preserving bone broth is a skill every homesteader should have. Homemade bone broth is super easy and frugal.  It can be made easily in a crockpot from any type of meat bone such as beef, chicken, ham, etc.  Homemade broth also results in a more nutritious and mineral-rich end result with a deep rich flavor.

Anyone else feel late to the bone broth parade? Up until a year ago, I had no idea the awesomeness of bone broth. I simply knew it was a good way to get more money from your meat purchases and a more frugal way to make broth at home. It might be among my top favorite things to have pressure canned bone broth lining my pantry shelves.

Then I started reading up and discovered bone broth supports good gut health among other parts of our bodies.

Listen in below to the full podcast, How to Make Chicken Broth and 5 Ways to Preserve It,  of the Pioneering Today Podcast, where we don’t just inspire you, but give you the clear steps to create the homegrown garden, pantry, kitchen, and life you want for your family and homestead.

What is Bone Broth?

Bone broth is pretty simple, it's a broth made out of the bones from animals, usually chicken, beef, or fish. You cover the bones with water, add in some vegetables and herbs for extra flavor and nutrients, and let it simmer on low for hours until all the goodness from the bones and vegetables is leached out into the water.

This is how many frugal homes stretched their meals. Cook a whole chicken, roast, or fish, and save the bones to make a soup or broth with the next day.

Why is Chicken Noodle Soup Good When You're Sick?

Chicken noodle soup when you have a cold? That's actually a good idea! Here's why:

Broth is also easy to digest. Allowing our digestive tract a break when our bodies need to focus energy on healing. When I'm not making chicken noodle soup, I love using broth to make sauces, gravies, stews, and even in place of water to cook quinoa or rice. Pretty much anywhere I'd use water in a savory recipe, I'll swap it out for broth. 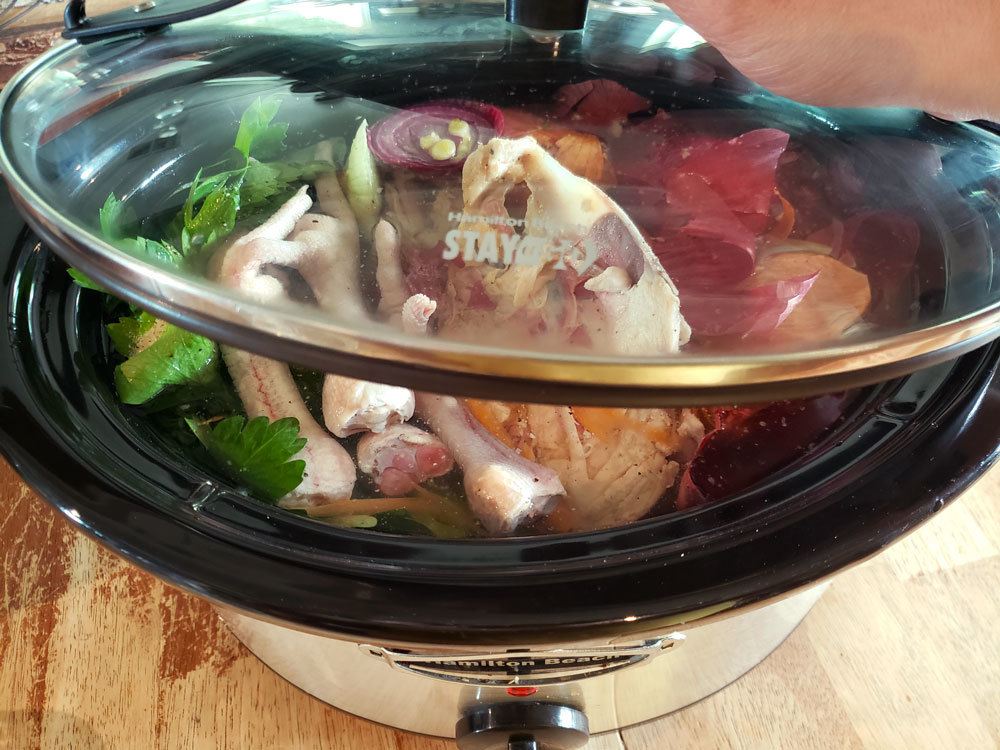 How to Make Bone Broth in a Crock-Pot 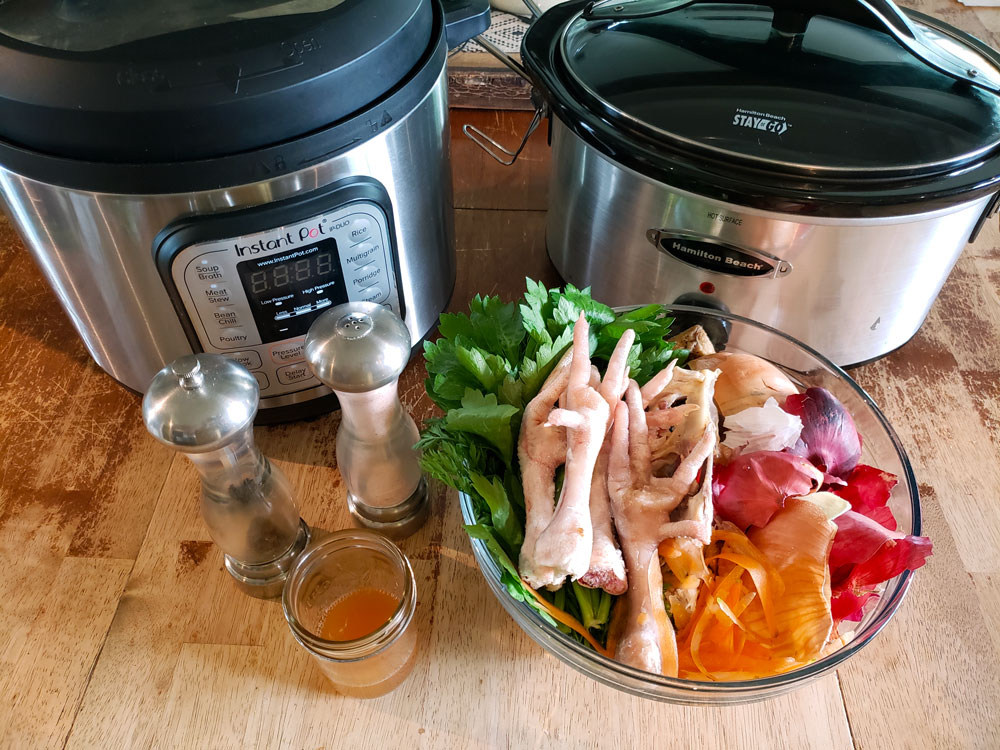 Here's a great post from Wardee at Traditional Cooking School on making continual broth or stock.

If you plan on canning to preserve bone broth then you need to place it in the fridge to let the fat layer firm up because it needs to be removed before canning. Broth MUST BE pressure canned and never ever, ever water bath canned.

Frugal Tip: The carcass (not the vegetables) can be used up to two times.  If you didn’t get much gel the first time then it won’t be as good for a second use as there won’t be any nutritional benefits. Note that even if you did get a good gel the first time around, the second time you use a carcass for broth you won’t get as much gel. 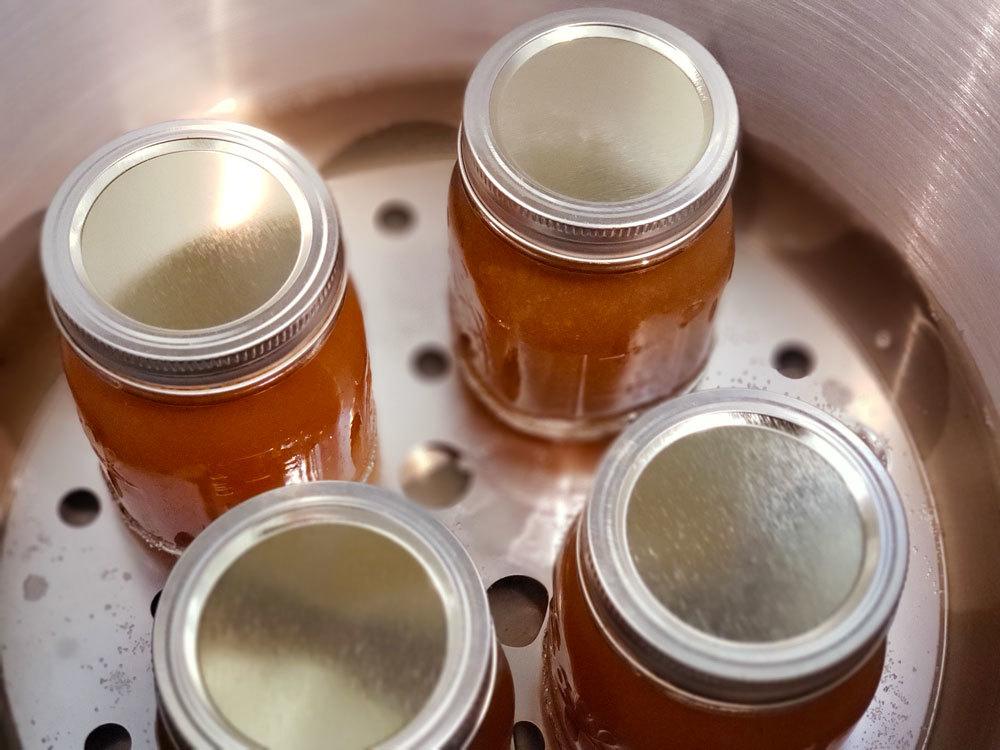 Looking for more preserving recipes? This book is it! Not only do I cover the nine different methods for home food preservation, but I also share all of my step-by-step tutorials, recipes, and easy-to-use charts.

Learn everything you need to know about cold storage (aka freezer), water bath/steam canning, pressure canning, dehydrating, fermenting, freeze-drying, root cellar, infusion, and salt/curing in the new book, Everything Worth Preserving.

Preserve food for a healthy well-stocked pantry & peace of mind, all in one resource.

In this book, you can search for any produce from A-Z (such as tomatoes) and get a list of all the ways to preserve that item, plus recipes! Grab your copy and all of your pre-order goodies here. 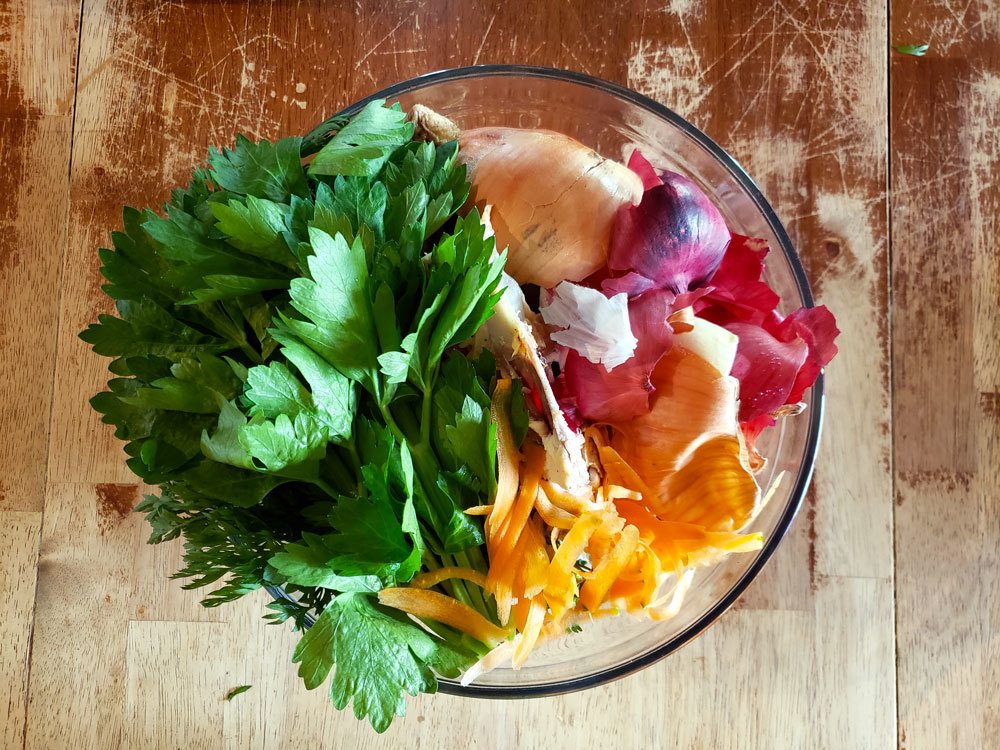 Stock extends the use of what we already have (or what many might just toss in the garbage).

As you can see in the photo above, I'm using the leaves off of a bunch of celery, carrot peels, onion and garlic skins, and a chicken carcass. These are all scraps from the food I used for other meals so this broth is costing me virtually $0.00.

The only cost will be that of the sea salt and the chicken feet (if you're not raising your own. I have seen deals for chicken feet for $.99/lb).

When I was doing the math to see if raising our meat chickens was worth it, I factored in that I can get 8 to 10 cups of stock per chicken carcass (organic stock in the store is about $4 a quart, so this equates to at least $8 saved per chicken).

The savings are even more since I also use homemade ACV, there is virtually zero cost other than the sea salt added for flavor. We're all looking for ways to stretch our dollar and to get more nutrition into our diets, bone broth is right up at the top for best value. 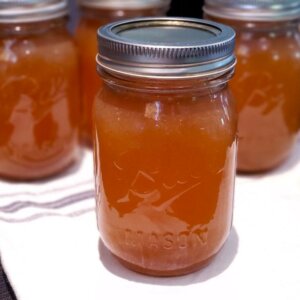 In a Crock Pot

In an Instant Pot

Keyword Broth, canned bone broth, Chicken broth, Stock
Tried this recipe?Let us know how it was! 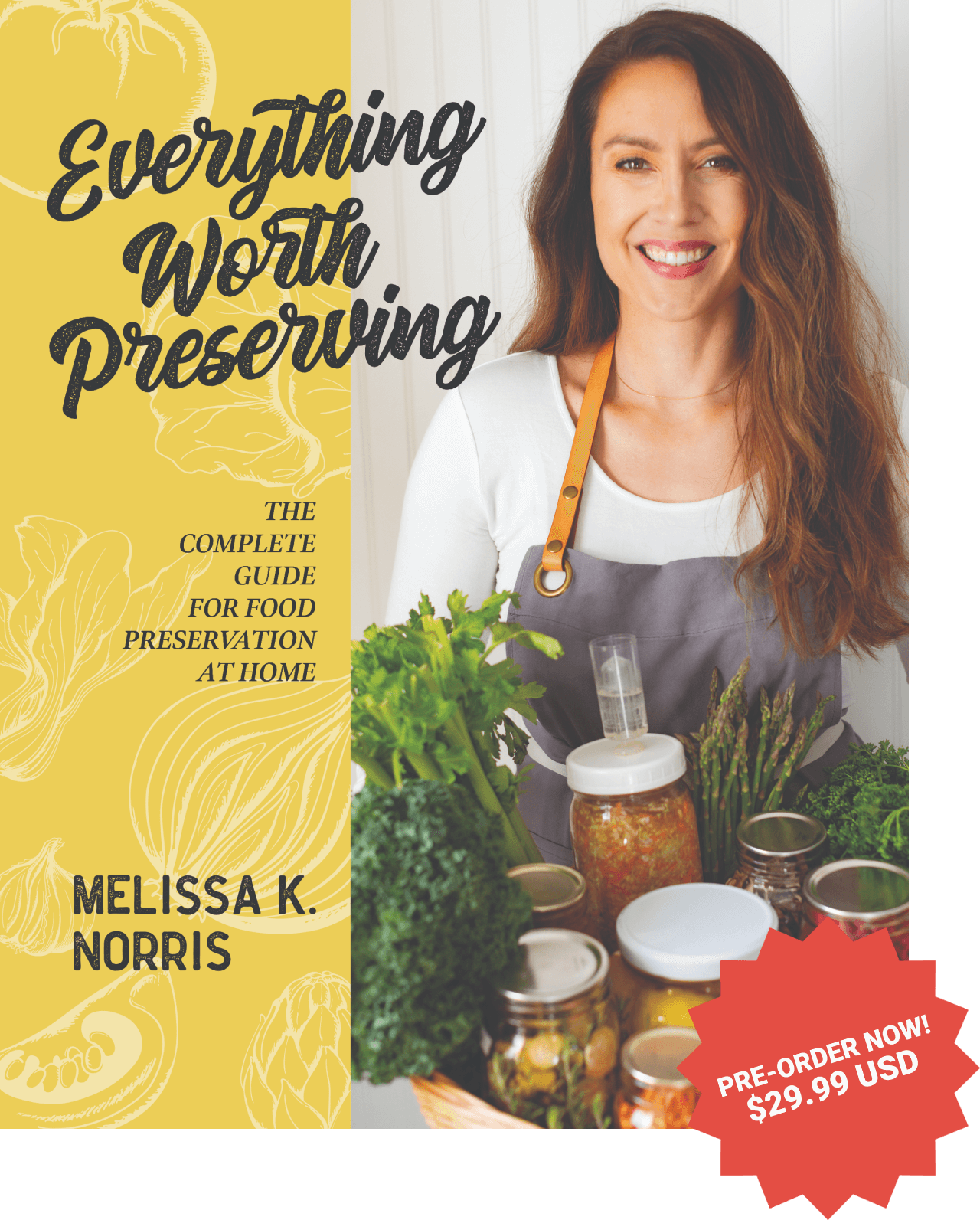 Want one reliable source for all your preserving needs? Popular podcast host and 5th generation homesteader Melissa K. Norris shares how to preserve fruits, vegetables, and meats for year-round eating with over 80 delicious recipes. From A to Z you’ll learn which methods can be used for each food, and important safety techniques. You’ll get […]

299 shares
FYI, we use cookies on this website. If you're okay with that, you don't need to do a thing! Just click "Ok" and keep browsing.Ok