Raising chickens for meat can be extremely rewarding as well as delicious. Knowing what to expect throughout the process of raising meat birds is important. Often times people have a bad experience because they don’t understand how the care of meat birds differs from heritage meat birds or laying hens. No worries, I lay it all out for you in this guide on how to raise chickens for meat below! 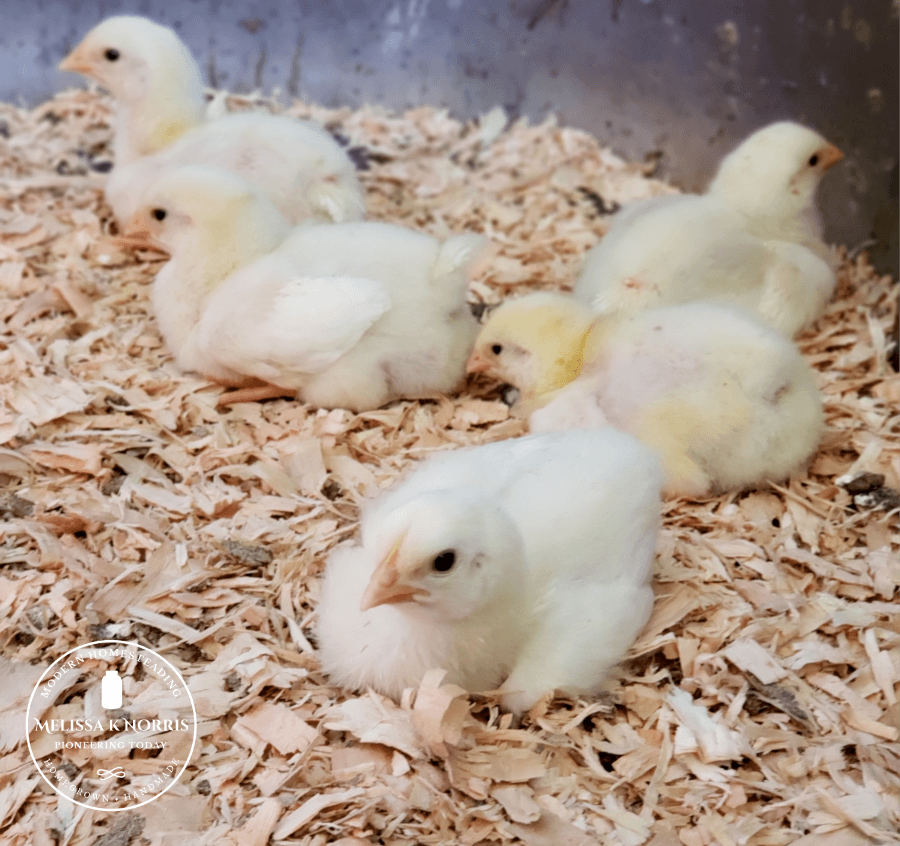 Listen in below to the full podcast, Episode #256 10 Tips on Raising Chickens for Meat, of the Pioneering Today Podcast, where we don’t just inspire you, but give you the clear steps to create the homegrown garden, pantry, kitchen, and life you want for your family and homestead.

Let me tell you, meat chickens are quite a different experience than our laying hens. When we first started raising meat birds we purchased ours from a local farming store as chicks. More recently though I’ve purchased them from a mail-order, McMurray Hatchery.

There are two camps when it comes to meat chickens. Some swear by heritage or dual-purpose breed and others raise what we consider meat bird breeds, like Cornish X or White Cornish broilers.

Dual-purpose breed chickens take longer to raise, resulting in a higher cost on feed, and an older bird by the time they’re ready to butcher. This isn’t all bad, as they’re easier to come by, can be used as a dual-purpose chicken, for both eggs and meat.

What are the best meat chicken breeds?

Cornish Cross are a hybrid chicken, meaning they’ve been raised specifically for meat. Meat birds are ready to butcher at just eight to ten weeks of age. Hybrid chickens are NOT Frankenstein chickens. I often hear people refer to them as such and it drives me a little bit crazy because it’s false information.

I’m all about staying away from genetically modified foods, but there’s a very big difference between GMO and hybrid breeding, both with our garden seeds as well as animals. Cornish cross have been specifically bred to come to weight really fast. The advantage is you’re not feeding them as long which means less in feed costs. You have a full-size bird able to be butchered much faster. This also means you don’t have to take care of them over a longer period of time.

When to Butcher Meat Birds

You do not want to let your Cornish mature to the age where they could begin laying eggs. They are not dual-purpose and need to be butchered between eight to 10 weeks. Occasionally you can push it to 11 or 12 weeks, but then you’re really pushing it. They’ve specifically been bred to get to weight really fast and they’re heavy eaters.

Most of the time they will have either leg failure or organ failure. Because they grow so fast, and if you let them go beyond where they should be butchered, their legs will break and they can’t support themselves. They could also have heart attacks. Their organs cannot support the weight that they would put on if you don’t butcher them when you’re supposed to.

I want to be really clear, when you get a Cornish breed as a meat bird, you need to be committed to butcher them between eight to 10 weeks of age. They will suffer if you change your mind. We take very good care of them and butcher very humanely. We treat them just like we would our other chickens as far as their care. When we go through the butchering process it is done in a manner where we try to keep the chicken as comfortable and calm as possible. 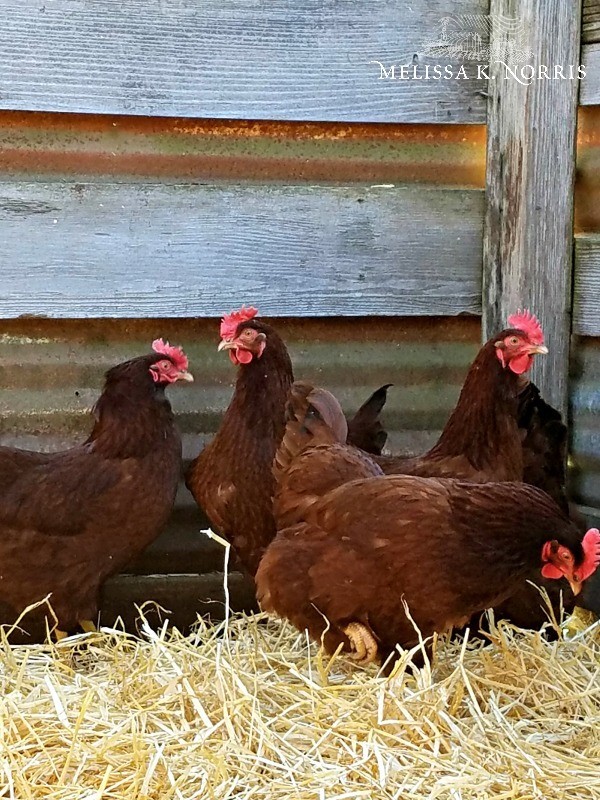 So while the Cornish breeds cannot be grown out to maturity, the dual-purpose breeds can. Dual-purpose will take longer to get to weight so you’re going to have to feed them for longer and put more time into raising them.

If you decide you want to breed your own chickens going forward without having to get hybrids, they can be a really great option. You can butcher some when they get to size and the rest you can let mature and become egg layers.

2. How Many Meat Birds Do You Need

When you order online through a mail-order hatchery, there are minimums because there must be so many chicks in the box to retain their body heat during the shipping process. We usually get 25 at a time but you can get them in smaller batches.

With getting 25 we figured that’s two whole birds a month. You may or may not eat more chicken than that. Because we also raise our own beef, pork, and fish for salmon and go crabbing we feel that this is a good number for our family. 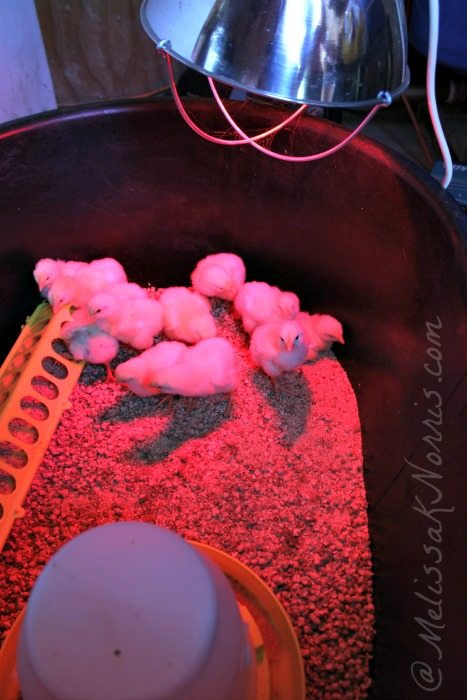 3. How to heat meat chicks

I made sure not to get them too early since I live in a climate that can be really cold out. When chicks only have their down, they need a heat lamp to keep warm.

It’s also important to have them in a pen or area without corners. Chicks can become trapped in corners and trampled by the other birds. They’ll need the heat lamp until their feathers come in, usually about 2 to 3 weeks.

We do not use heat lamps with our full-grown chickens…they go just fine all year long, even in winter, without any supplemental heat.

I don’t advocate using a heat lamp to force your birds to lay all year either. However, when you have baby chickens, you have to use a heat source or they will die. There are other options like heat plates, but I don’t have one so I’m using what I do have.

For more details, be sure to check out my beginners guide to Raising Baby Chicks for the First 6 Weeks. This applies to chicks that are being raised as egg layers as well as meat birds. Those first six weeks are the same regardless.

It’s the beginning of May and I just received my order of meat chicks. The reason I’m pointing this out is that I don’t want to get them too early because of cold weather, but I also don’t want to get them too late. They don’t deal well with the major heat of summer either. Because they’re big birds and get up to their weight quickly, they don’t move very well so they can get heat stroke easier than any other breed, especially as they’re getting close to being butchering size. They’re also smellier. They poop more because they eat more.

Plus, as summer rolls on and it gets hotter and hotter, we have other things that have more work to do on the homestead. We don’t want to be doing as much physical work because it is so hot out and so we don’t want to be dealing with our meat birds, quite honestly, as we move into July and August, which is really hot here.

4. How Much to Feed Meat Chickens

Another reason I chose the breed I did was because of food costs. I don’t know, and none of us do, with all this covid-19 stuff going on right now, what will and won’t be available.

According to University of Kentucky Agriculture Extension Office a flock of 25 meat birds weighing 5 pounds at butcher time will go through 5 fifty-pound bags of feed.

My local granary, which is about an hour and 20 minutes from us, I can get organic very freshly milled feed. At the time I ordered my meat birds we were just going into shelter at home so I didn’t know how long certain businesses could stay open and serve the public. So I calculated out and bought the amount of feed I would need to raise the meat birds from chick to eight weeks of age.

To help them not get too big too fast you have to take their feed away at night. Basically you have to monitor what they’re eating. I put their feed out in the morning, usually around 7 AM and then I go out at around 8 PM and take it away.

We choose to feed unmedicated organic meat bird feed, which is between 20 and 24% protein.

Just like their feed, they go through a lot more water. Be sure they have plenty of freshwater in their pen. Be sure to give them water when you first get them too. 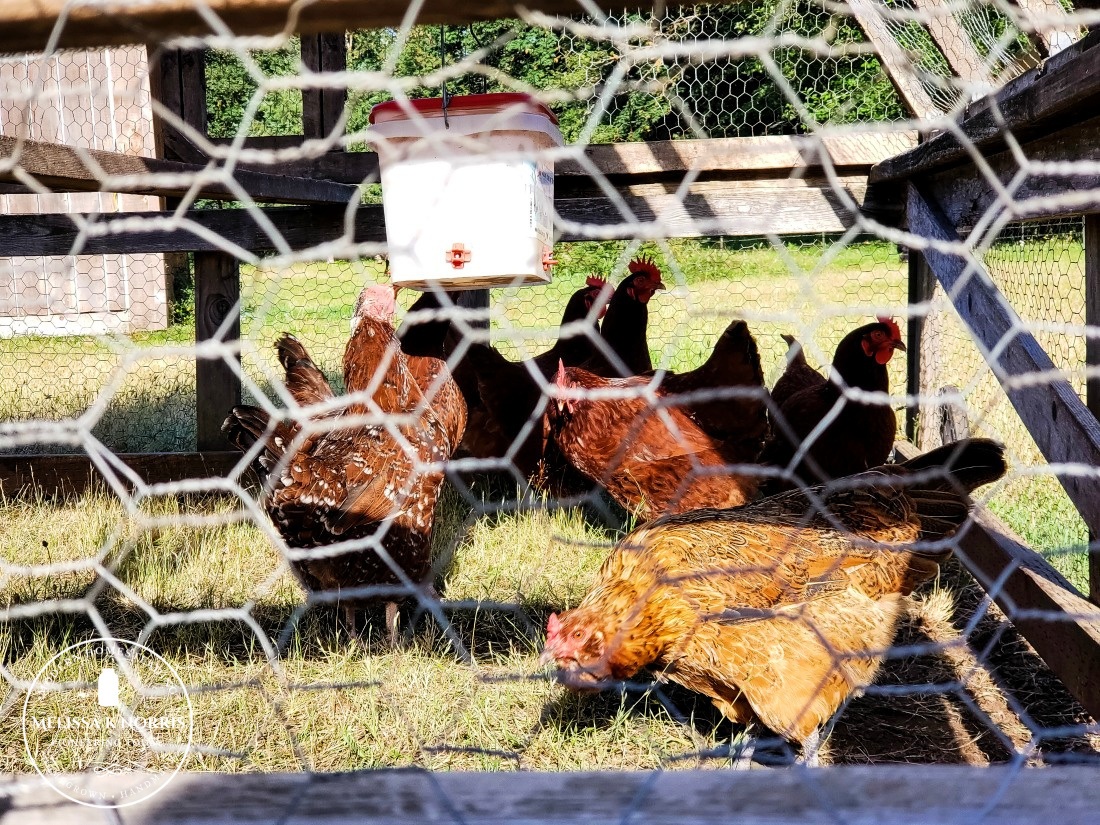 Be sure they have shade, they’re lazy. There’s no nice way to put this. Like I mentioned earlier, meat chickens don’t move around like our laying hens. Their feed and water needs to be close by.

They lay around a lot. Their bodies are larger and as they grow, they can’t stay standing for long periods of time. Be sure they have shade, their feathers are slower to come in and they have light skin. If you let them out into a run or pasture, keep food and water in the coop and where they’re ranging.

7. Stick to Your Initial Decision

I touched on this earlier. Don’t back out. Once you have the meat chickens, do not change your mind about butchering them. They’re bred to be raised to a maximum of ten weeks. If you go over this, their legs will break and give out due to the weight of their bodies. Or they’ll have heart failure. The whole point of raising your own meat is to be humane, don’t let them suffer because you got cold feet.

Don’t stuff your birds into a tiny living area. Be sure they have room to move about. If they can run around on pasture, that is best. If not, be sure there’s enough space for them to spread out and you keep it clean. 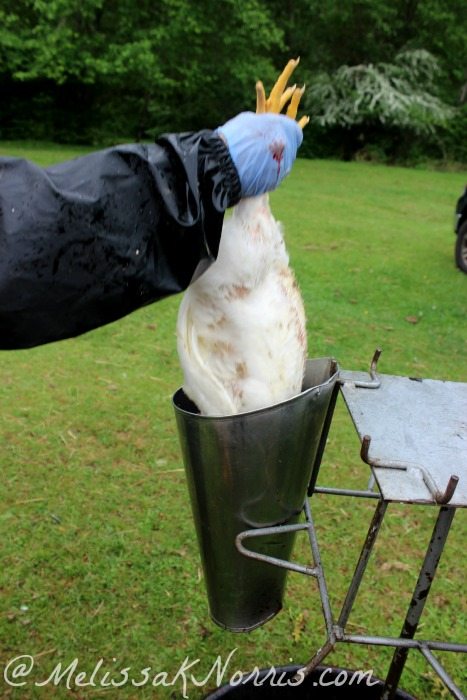 Mark the calendar. Count out from when you purchased the chickens to their full maturity date of eight to ten weeks. Many county extension offices have chicken butchering equipment for rent, but you have to reserve it in advance. Be sure you book it in advance for your set time frame. It only costs $25 to rent the equipment and we get to keep it for 48 hours.

Anytime we’re raising animals for food, we don’t think of them as pets. We don’t name them. We do make sure they’re cared for and treated humanely. Our children know upfront the animals are for food. We don’t lie, fib, or try to hide the fact. Our children are very well adjusted with the fact we raise our own food and they know what that entails.

For those of you who don’t eat meat, I respect your decision, please respect my decision to raise livestock for meat.

Here’s How to Butcher a Chicken at Home

Do you raise any of your own meat?

Our Food Production Plan & How to Plan for Livestock

5 Tips to Raising Livestock for Food