Do natural insect repellents work? I used to wonder that same thing. We live in the lovely Pacific Northwest, and though we don’t have Alaska size mosquitoes, we’ve got our fair share. 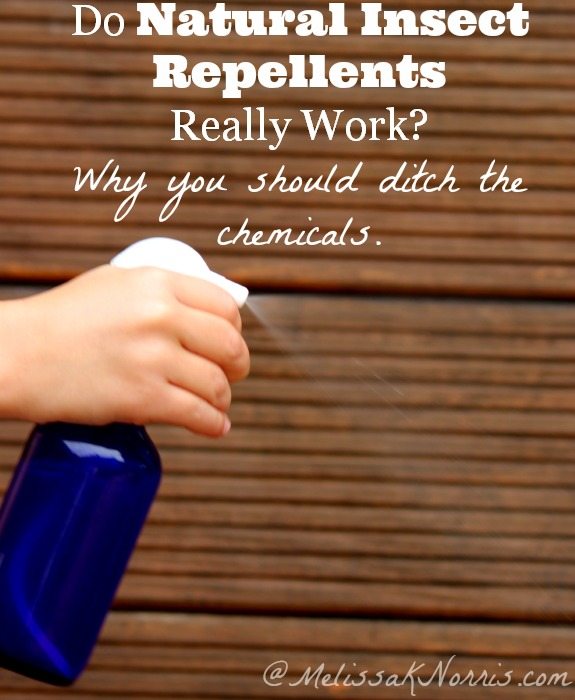 With our critters, garden, and homestead, we spend a lot of time outdoors. Especially come summer time. We’re camping fools. Last weekend we caught about 15 trout. You know you love the great outdoors if you go camping in the rain. Ever seen those campsites with the blue tarps strung from one end to the other? Yep, that would be us.

Despite my love of the outdoors I can’t stand mosquitoes. They carry nasty diseases and they itch like the dickens when they bite. And the buzzing. If you’ve ever had a mosquito in your tent you know exactly what I’m talking about.

When I was younger I used whatever bug spray we could find. Most of these contained Deet. One time I got some on my lip. It went numb. Yep. Totally numb until hours later when the spray wore off.

My brother works in the woods and used some Deet insect spray from a fellow worker. It melted the plastic coating from his glasses. Yes, melted!

Um, I don’t know about you, but I don’t care who says it’s safe, if it makes my skin go numb and melts plastic, it ain’t safe enough for me. You can go here (scroll down to the middle of the page to health effects) to read about Deet and seizures, central nervous system, and insomnia.

In light of this I decided to only use natural insect repellents. One of our favorites is the Badger Anti-bug Shake and Spray.

We’ve used in the thick of mosquito season and have been impressed, both on the water and in the bush. My husband is an out and out skeptic of natural things, but even he now reaches for it.