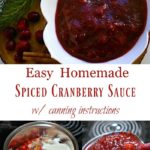 Homemade spiced cranberry sauce puts those tinned canned jelled versions to shame especially when you add in a spiced version. And you wouldn't expect anything less than from scratch cranberry sauce pioneer woman style on a homesteading blog and podcast entitled Pioneering Today, am I right?

This easy from-scratch cranberry sauce only uses 5 ingredients and is ready in less than 30 minutes!

You're in for a treat today because Anna is sharing her best homemade cranberry sauce recipe today with a fun twist of spices.

I never used to like cranberry sauce. I didn’t even bother to put it on my plate most of the time at Thanksgiving and Christmas. But then again, like most modern families, we always ate it out of a can from the store, and I found it a bit boring.

To be honest, for most of my life I wasn’t a huge fan of holiday dinners. I’ve never been a big turkey fan and I don’t love plain ol’ mashed potatoes or boiled brussels sprouts either.

But after my husband and I took over hosting holiday dinners a few years ago, I’ve been on a mission to recreate traditional holiday dishes with a twist. When we do a turkey, now we use a smoker to cook it, giving it a distinct flavor and a crispy skin. Otherwise, we do a clove-studded ham basted in apple jelly.

We’ve upgraded the mashed potatoes to a scalloped potatoes recipe that is to die for, and I now char my brussels sprouts in my cast iron pan and top them with a little lemon juice and parmesan cheese, which is definitely an upgrade on the traditional boiled recipe.

All of these “upgrades” on the traditional Thanksgiving and Christmas meals have made holiday dinners something we truly look forward to all year in our house now and let’s just say our extended family is happy to let us host each year.

But the cherry on top (or should I say cranberry) is this upgrade on traditional cranberry sauce.

This homemade cranberry sauce is made with cinnamon and vanilla, giving it a subtle twist that compliments and helps to balance the tartness of the cranberries. It’s beyond easy to make, requiring just 5 ingredients total (one being water), and takes just half an hour total to cook with next to zero prep time.

You can also omit the cinnamon and vanilla if you’re just looking for a traditional, simple cranberry sauce recipe. Or omit the vanilla but keep the cinnamon or vice versa.

I actually made this for the first time last year and I made it with just vanilla. I LOVED it because it tasted sweeter, like jam. But my husband thought the vanilla flavor was too strong (learn how to make your own homemade vanilla and other extracts here). So this year I reduced the amount of vanilla by half and added a couple of cinnamon sticks. He gave me a big thumbs up:)

I like this version better too because the cinnamon adds just the right balance of spice, which is always reminiscent of warm family gatherings on chilly fall and winter nights over the holiday season.

How long will fresh cranberry sauce last in the refrigerator for

It will also keep well in the fridge for a week, which means you can definitely make this ahead of time and save time cooking on the big day without sacrificing homemade taste and quality.

How to can homemade cranberry sauce

Cranberries are a high acid food making this a great sauce to preserve.

This recipe can also be canned so you could make it ahead of time, or make a big batch for Thanksgiving and preserve some for Christmas. I also recommend doubling the batch for canning as the recipe below is enough to fill just one-pint jar or two jam jars.

What are your favorite twists to add to homemade spiced cranberry sauce? 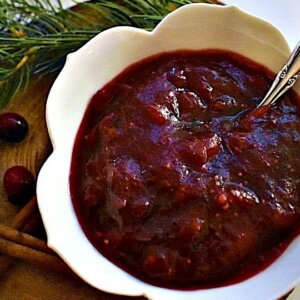 To Can Cranberry Sauce
Tried this recipe?Let us know how it was!