Bartering is a life skill our ancestors knew how to use and used often, but in today’s society, bartering isn’t as common practice as it used to be. However, bartering is a skill still used by many and is definitely something any self-respecting homesteader, preparedness, or self-sufficiency person will want in their tool chest. 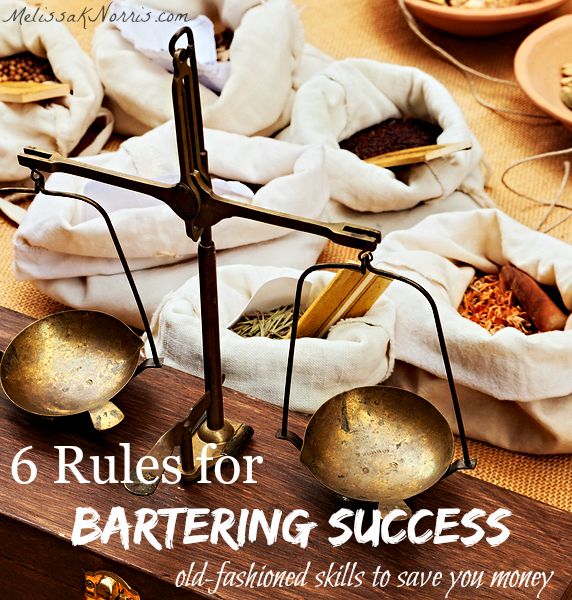 Bartering is simply using something you posses in exchange for something someone else has. Actually, it’s the same thing as using money, because we’ve put a value on money ( though the value of our money today is definitely up for debate) and set the value of the item we’re buying at a certain amount. However, for the sake of this article and most references to bartering, it is the means of exchanging goods without money.

Watching someone experienced with bartering is like watching a skilled dancer and partner go through an intricate dance so effortlessly, you don’t realize how hard the dance is until you try it for yourself, and discover you not only step on your partner’s toes, but your own as well. Of if you me, you might end up tripping yourself.

My father grew up during the Great Depression and has bartering skills like no other I’ve seen. He learned from people where this was a way of life, when people didn’t have money, but they had other things and got by just fine without it. Credit cards were unheard of and purchasing things on credit has never been something my father has ever practiced.

He’s never demanding or rude, but can move through the negotiations smoother than freshly spun silk. Even witnessing his negotiations my whole life, I still don’t have his depth of skill and have even had him go with us when we purchased a used truck last year.

But, I have learned a lot from watching his negotiations and want to share those with you.

First rule of bartering, you have to have something someone else considers valuable. You can’t come to the table without anything to offer.

However, it doesn’t necessarily have to be something that’s tangible. You can barter a skill set in exchange for another skill set. For example, you might know how to fall a tree, but need help with some electrical work. Your neighbor or an acquaintance is an electrician who needs a tree fell on his property. You agree to fall the tree and he agrees to wire your shed for you or install a new light on your house.

Neither of you actually bartered an item, but a service, a skill set. We’ve used this type of bartering many a time.

It can also be a combination of skill set traded for an item or help. For example, we had a large amount of fire wood, more than my husband and I could chop, stack, and clean up. So we offered our neighbor some of the wood if he helped us chop it up in exchange for his help. Worked great!

Second rule of bartering, both parties need to feel that they received a good deal. Nobody likes to feel like they got the short end of the stick. And if you plan on staying in an area and bartering, you don’t want to be known as a cheat or someone who is unfair, at least, I wouldn’t. You’ll find it harder to find someone to barter with and frankly, I don’t think any of us want to be known as someone who takes advantage of others.

Now, you might be bartering something that you don’t have much use for or doesn’t seem important to you, but if the other person places a high value on it, then they’re going to be thrilled with deal. It’s all in the eye of the beholder, right?

Third rule, know what you value the item at. In other words, know what you’re willing to take for the item and what you’re not before you begin bartering, and don’t budge. Sometimes, in the heat of the barter, you might take less or make a trade for less than you really want. If you tell yourself ahead of time, you’re less likely to budge from what you want.

This doesn’t necessarily mean the dollar value of an item, but what you’re willing to exchange it for. Say you have a saddle, but no longer have a horse or ride anymore, you might have paid several hundred (or thousands, depending upon the saddle) dollars for this saddle, but it’s useless to you at the moment. However, you might really be in need of a tiller for your garden. So even if the tiller is less expensive than your saddle, you’d be willing to trade because the tiller is much more valuable to you than the saddle, especially when you count in the amount of food you’ll be able to grow on the newly tilled land.

Fourth rule, don’t be in a huge hurry. There’s a certain art to negotiation and it often involves several back and fourths, though not always. If you already determined what you’ll take for the item, and the person you’re bartering with isn’t willing to give you what you want, be okay with walking away. You might find something better to barter on or the person may see you’re not budging and come back and accept your deal.

Fifth rule, let the other person present the first offer. If possible, let the other person offer up the first terms of the bargain or negotiation. This lets you know how much they value your item at and what value they’re putting on their own and gives you a bit of an advantage. It’s not always possible and doesn’t mean if you go first that you’ll end up on the lower end of the deal, but if possible, see if the other party will go first.

Sixth rule, don’t show your excitement too soon. I’m horrible at playing poker. I wear my emotions on my face and if I really want something, it’s hard for me not to show it. But when bartering, you don’t want to show too much enthusiasm too fast, as not all people adhere to our second rule and play fair. If you show you really want an item, they might drive a harder bargain than they would have previously.

There are many places to barter, even more so now with social media and the internet. There are usually bartering groups for your county or city on Facebook.

There are often swap meets or bartering fairs in cities. Flea markets are another place you can barter.

A reader shared with me there was a bartering fair in a wooded area near his home. There were blankets and other handmade goods available for barter, but the most sought after item for bartering were 100 pound bags of wheat. And if you’ve been following our food storage series, you know wheat is an item I recommend stocking up on, and in bulk (6 Tips for Buying Food in Bulk)

Check the local section of newspapers or bulletin boards for bartering places or meetings.

Never be afraid to ask someone if they’re willing to barter or accept something else in exchange for an item. You’ll never know unless you ask.

Do you have any tips for bartering?

10 Easy Tips to Grow Your Own Food