When God Closes a Door

By Melissa Norris | Other Articles

Have you asked God for something with the caveat that His will be done?

This weekend, I received an email from my agent that a project we’d submitted to a publishing company was ultimately rejected. 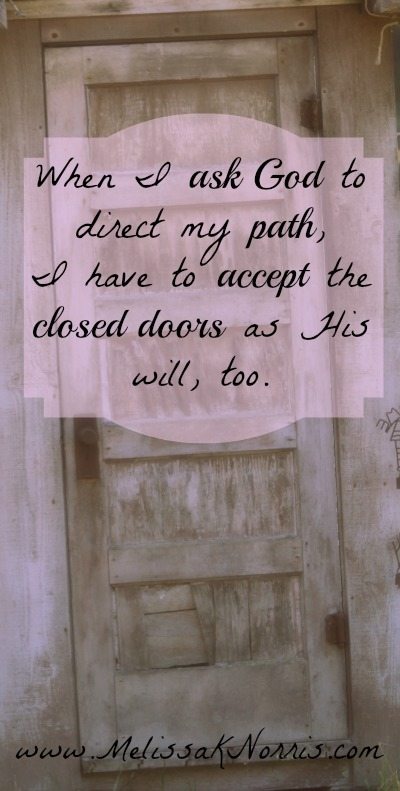 This happens quite frequently in the writing world. It’s not the first time and it won’t be the last for me, or any writer seeking the traditional route.  But I really thought God had been leading me up to this project as my break-in point.

I’d prayed for God to remove any stumbling blocks and to open the doors where He wanted my work to be. I prayed that He would shut the doors that He knew wouldn’t be right for me. But I realized what I really meant was as long as that’s right now, at this house.

When I ask God to direct my path, I have to accept the closed doors as His will, too. Tweet this

With this newly closed door, I know He’ll open another one. The right one, at the right time.

He has made everything beautiful in its time. He has also set eternity in the human heart; yet no one can fathom what God has done from beginning to end. (NIV) Ecclesiastes 3:11

I can’t fathom why this door was closed. He may reveal it later, or He may not. But I do know, it was for my good.

Here’s what I’ve learned in order to handle rejections. Your rejection might not be exactly like mine, but we all feel its sting throughout life.

1. Allow yourself to feel disappointed. Too often, I want to put up a brave face, and not deal with the fact that it hurts.

2. Don’t dwell on the hurt. After acknowledging I’m hurt, it’s time to move on. Lingering in the pain doesn’t fix anything, it only makes it worse.

3. Look for the positive. A wise friend said, but you made it to pub board! She was so right.

4. Talk with a Godly friend. There is nothing like Godly counsel to help ease the hurt. A wise friend is worth more than gold.

5. Pray and trust the Lord. It’s easier to trust God when things are going like we want. But we learn more and rely on Him when things develop beyond our control. Rest in Him.

6. You’re not defined by one thing. I spent some time working out, planted new vegetable starts, and baked two loves of bread. Being an author is just one faucet of my life, not my entire identity.

Our lives aren’t the product of one moment or one opportunity. Tweet this

I don’t know what rejections or disappointments you’ll face, but I do know that you’ll experience these at some time. And Jesus will be there. He will never reject us and His will is where we want to be, not in our own.

What has brought you great disappointment? How did you get beyond it?

8 Weeks to a Homemade Christmas

Win an All American Sun Oven!

When You Want to Feel God’s Presence

Seeing God’s Love For You in Your Garden

No More Guessing or Wasting Time The Pioneering Today Academy is a monthly membership that gives you the step-by-step tutorials and community to create a homegrown and from-scratch garden, pantry, and home.