Stacking jars of home-canned food on top of one another or storing with the bands on is surprisingly a hot debate in the home food preservation circles. There are a ton of myths or incorrect advice swirling around out there.

I’m a huge stickler for safety when it comes to canning and only use advice or recipes from tested sources, but the tested sources advice on these two subjects may surprise you. 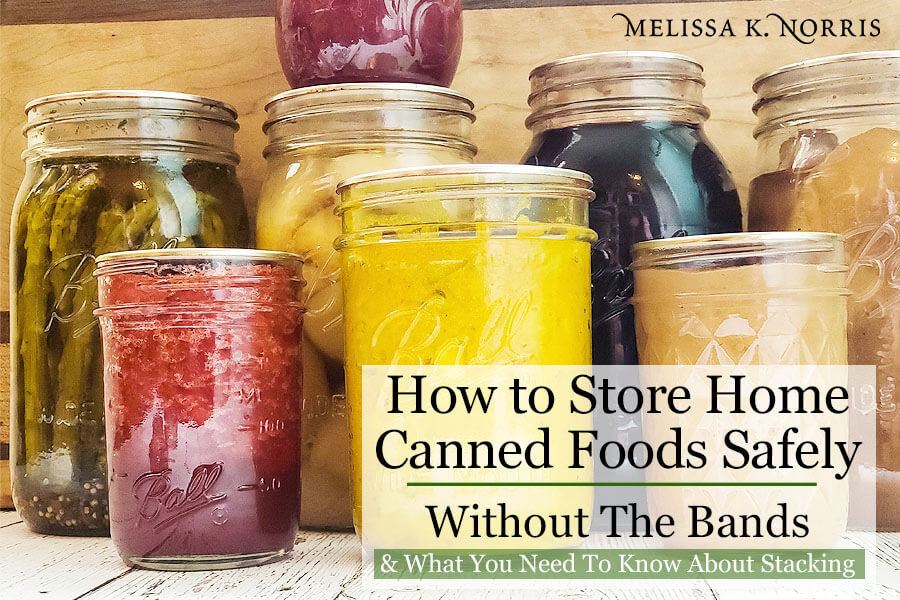 Listen in below to the full podcast, Episode #185 How to Store Home Canned Food Safely – Jar Stacking & Canning Rings, of the Pioneering Today Podcast, where we don’t just inspire you, but give you the clear steps to create the homegrown garden, pantry, kitchen and life you want for your family and homestead.

How to Make Sure Your Seal Sets on Home Canned Food

When we’re talking home canning and Mason jars specifically, the band is the part that you screw down after you put your metal lids on top of your jars before processing them in a pressure canner or a water bath canner.

Before we get into why you should always remove canning bands from home-canned food, here are some other important rules to follow when processing and storing home-canned food:

Here is where the controversy comes in. When it comes to your canning bands, you should actually remove the bands after they’ve gone through that minimum 12 to 24 hour period where you don’t touch them.

Why you should remove canning rings from home-canned food

The main reasons I remove my canning rings (or canning bands) after processing is this:

If you decide to leave the bands on for storage (which I don’t recommend) make sure you remove the band/ring after the jar is cooled from processing, wash and dry thoroughly before placing the band back on. Always check your seal when taking out a jar and consuming it.

Is it safe to stack your home-canned jars

The National Center for Home Food Preservation says to not stack jars too high, no more than two jars. Personally, I only stack at the end of the season if I’m totally out of the room and I only stack a smaller size jar on top of a larger jar.

Make sure your shelf can support the extra weight. Never stack jars on the front of the shelf. I only stack in the back, against the wall. Some people like to line cardboard between the rows to help distribute the weight.

Make sure you check the seals as shown in the video when stacking (especially the lower jar) to make sure you haven’t disrupted the seal or compromised it.

With having canned for 20 years I’ve never had a seal compromise by stacking but best practice would be to avoid it if possible.

Now, could it weaken a seal? Possibly. That’s why a lot of people choose not to stack their home-canned goods on top of one another. But if you go to the official sources, which there isn’t actually anything that says do not stack your jars because it’s proven to make you lose a seal or it’s not safe.

Of course, use your common sense. Make sure you stack your jars on a sturdy shelf that can support the weight and don’t stack rows and rows of jars on top of each other.

Personally, I only stack at the end of the season if I’m totally out of room and I only stack a smaller size jar on top of a larger jar. What I try to do is to put my quart and pint-sized jars on the bottom and stack smaller jam or jelly jars on top of them. But I never stack more than one jar on top of another, and again, I have never experienced any type of seal compromised by doing this.

What happens if I remove my canning bands and the seals pop and break?

Now, one argument I’ve heard people say is “well, when I removed the bands after I canned my food, the seals popped. So I don’t want to remove the bands because I don’t want my seals to break.”

Okay, listen up my friend: If you remove the band and your seal pops than it was not sealed properly to begin with.

By all means remove every single band if that happens so that you can check those jars before consuming them, because removing the band should not, I repeat, SHOULD NOT make you lose your seal.

As I said, I’ve been canning for 20 years and removing my bands, and I’ve never lost a seal by removing the band. If you remove the band and the seal breaks, it’s not from the band removal, it’s because something else went wrong during processing.

Another reason why you want to remove your bands is because of siphoning.

Siphoning is when some of the liquid will come out from the jar and beneath the lid before it seals. So during the processing time, that’s why sometimes you will notice that there is liquid loss inside the jar after you can, even though you followed the correct headspace for the recipe. Or you’ll pick up the jar and it feels kind of sticky on the outside or you’ll even see a little bit of things on the outside of the jar.

Also, if you’ve got sticky stuff or food on the outside of a jar, that can also attract pests. So it’s best practice to remove the band, wash or wipe down the outside of the jar with a wet cloth and dry it completely after it’s sealed and you’ve waited that full 24 hours.

Now some people will do this; They’ll remove their bands, wipe everything down, make sure it’s totally dry, and then they will loosely put the band back on and store it on the shelf.

While that is not what I practice, to be fair, our trusted sources don’t say that you absolutely have to remove the bands, but they do say that it’s best practice to do so for all of the reasons I just talked about.

However, if you decide to leave the bands on for storage (which I don’t recommend) make sure you remove the band/ring after the jar is cooled from processing, wash and dry thoroughly before placing the band back on. Always check your seal when taking out a jar and consuming it.

If you would like more information on preserving your food at home, including safe canning practices and pressure canning then I highly encourage you to get yourself signed up for the free Home Canning Video Series.

And for more information on safe canning and preserving, be sure to check out the following posts and past episodes The Pioneering Today Podcast:

How to Grow Mushrooms at Home

Ultimate Guide to Fermented Vegetables: What You Need to Know

Best Methods for Drying Herbs for Stronger Medicinal Properties
Ultimate Guide to Fermented Vegetables: What You Need to Know
A Complete Guide to Home Food Preservation (What to do When You Can’t Find Canning Supplies)
9 Things To Do Now for Fall COVID Preparations
Fermented Pickles – Quick & Easy Old-Fashioned Recipe