The best way to water vegetable gardens based on water use, ease of putting in the system and the BIGGEST benefit, certain options provide an organic way of helping eliminate disease and increasing your harvest. All from the way you water, pretty cool, huh?

But before we dive into the technical tips, I want to let you know to mark your calendars for October 2, 2019, when I’ll be launching my free world premier viewing of my full organic workshop. That means, for one week, starting on October 2nd, you are going to get complete full access to my entire organic gardening workshop. I’ll have a lot more details for you as we get closer to it, including where you can get your seat reserved for this online workshop.

Now, back to the subject at hand. 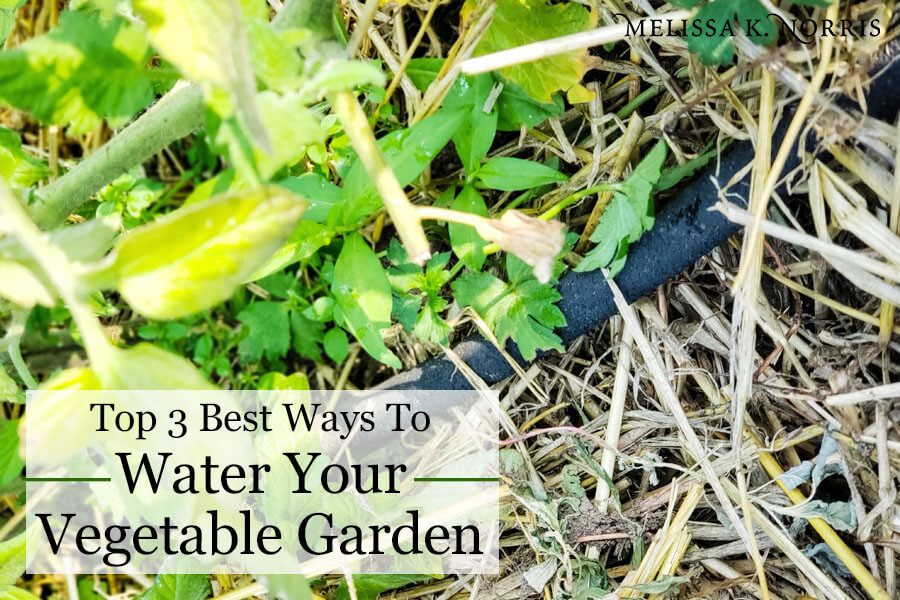 Listen in below to the full podcast, Episode #188 Best Way to Water Vegetable Garden to Increase Harvest & Eliminate Disease, of the Pioneering Today Podcast, where we don’t just inspire you, but give you the clear steps to create the homegrown garden, pantry, kitchen and life you want for your family and homestead.

Here in the Pacific northwest where I live up in the foothills of the north cascade mountain range in Washington state our hottest and driest time is July, August and into the beginning of September. June I don’t have to water much during a typical growing year. This may be different where you live; you may experience the need to water and irrigate a lot sooner.

I’m going to talk about the different options, what we use, and why we use it in specific areas to give you some ideas for your own garden.

Why Your Watering Methods Matter

Many plants are more susceptible to different fungal diseases, specifically blight, early blight, downy mildew and powdery mildew. They all thrive when you have a lot greenery and leaves that are really wet for extended periods of time.  It’s kind of like a breeding ground and perfect conditions for these things to set in and quickly take over. Some are more devastating than others.

Powdery mildew doesn’t normally kill the plant. For us here most of our squash will get some degree of powdery mildew by the end of the growing season regardless of best practices. I’ll still get a good production and a good harvest however. Downy mildew and blight, especially blight, will definitely devastate a crop if not gotten a hold of right away. It’s best if you can use preventative measures when it comes to blight rather than trying to treat it.

It’s true of anything, if we can prevent it from happening then Hallelujah! Powdery mildew and downy mildew can be treated. Downy mildew, if it sets in early in the season like it did for me this year, can affect crops so it’s something that I treat.

Why we should avoid Overhead Watering

What do all these diseases have to do with the way we water? Well, quite a bit. If you live, like I do, where you get a lot of rain, then you have overhead watering just by nature. Overhead watering, which is where the water comes over the top of the plant and hitting the leaves before it hits the ground, gets the leaf of the plant saturated with water which means it stays wet instead of where it’s the ground that gets and soaks up all the moisture.

Rain is obviously going to do this and so will overhead sprinklers. Even watering by hand, pouring the water over the top of the plant instead of putting the spout or hose nozzle at the base of the plant, can be considered overhead watering.

We want to avoid overhead watering on plants that are most susceptible to blight. Plants such as:

I grow my tomatoes in a high tunnel, which is basically an off-grid greenhouse – meaning it’s has plastic greenhouse plastic that covers it on a frame but I don’t heat it.  So of course I don’t use sprinklers after having gone through all the trouble of planting under plastic to keep it free from any overhead watering.

Instead, I use a garden soaker hose as my first top pick. I love them for many reasons. This is the exact same soaker hose I’ve had for 5 years –> 100 foot soaker hose system

Despite how much I love my soaker hoses, I don’t use them for my entire garden…at least, not yet. 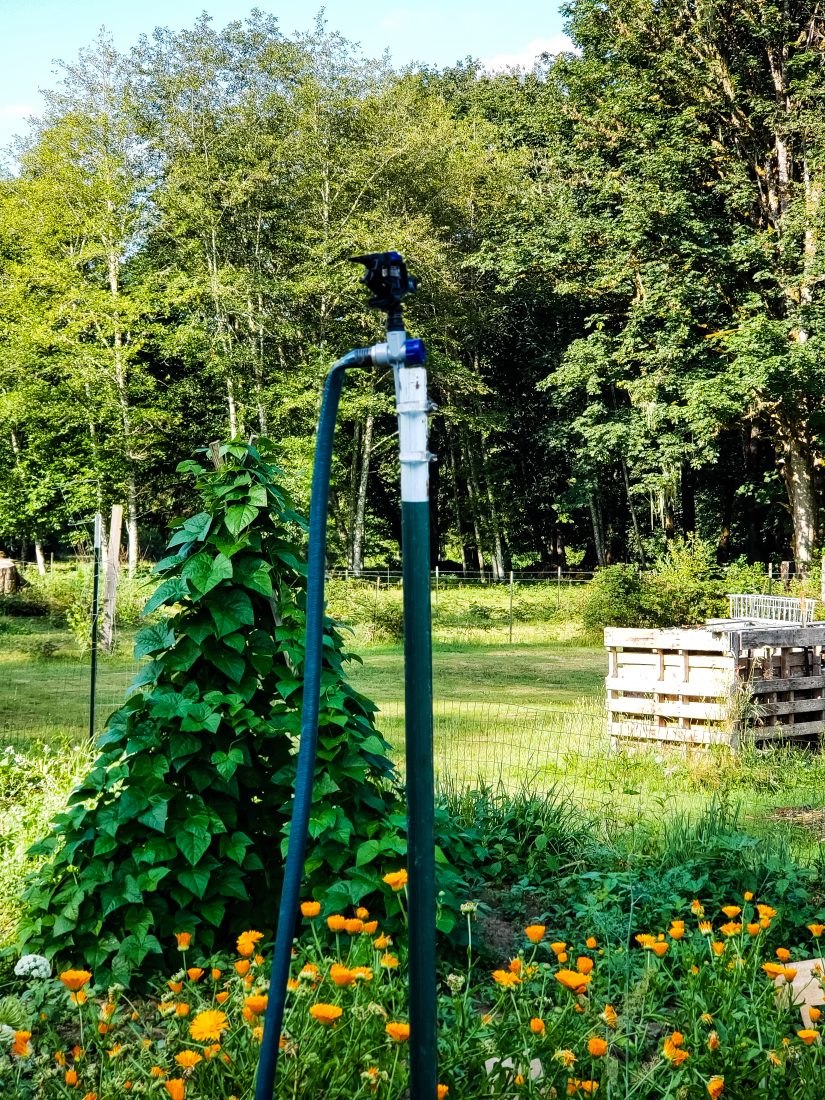 The other way we water is for the main annual vegetable garden. I do have soaker hoses that I’ll put in certain areas of it (smaller areas) but for the main summer vegetable garden we just put in a six foot metal t-post. On top of that t-post we put a sprinkler head that turns in a 360 degree circle (like this oscillating sprinkler head). Of course, we run a hose to it from the faucet. It’s one that sprays in a large circle, but we have it up so high that it will get the entire circumference of the garden that way.

Since it’s overhead watering we have it so that it doesn’t hit my tomatoes, however, it does hit my peppers. But I have them planted on the perimeter this year so they aren’t getting as much water as the rest of the garden because I turn down the pressure a little so that it doesn’t shoot out as far. The peppers still get water, just not as much.

When is the best time to water to avoid fungal issues?

I do have to be careful with my squash though because of powdery mildew and downy mildew. One thing that helps with that is to water in the morning; the early morning before the heat and sun is hitting and evaporating the water that’s falling. That’s not very efficient.

The reason I run the sprinkler for a few hours in the morning before turning it off is so that when the sun is fully up it’s going to evaporate the water that’s on the leaves. So it’s not sitting there all night long to be a breeding ground for any type of fungal disease.

If you live where it’s really hot, a lot of people choose instead to water in the evening. They feel like the plant can really absorb all the water because the sun isn’t there evaporating it off. It’s kind of a debate one way or the other. But if you’re dealing with any type of fungal diseases that’s not really ideal.

It’s one of those things that you need to play with and determine what’s best for your particular climate. 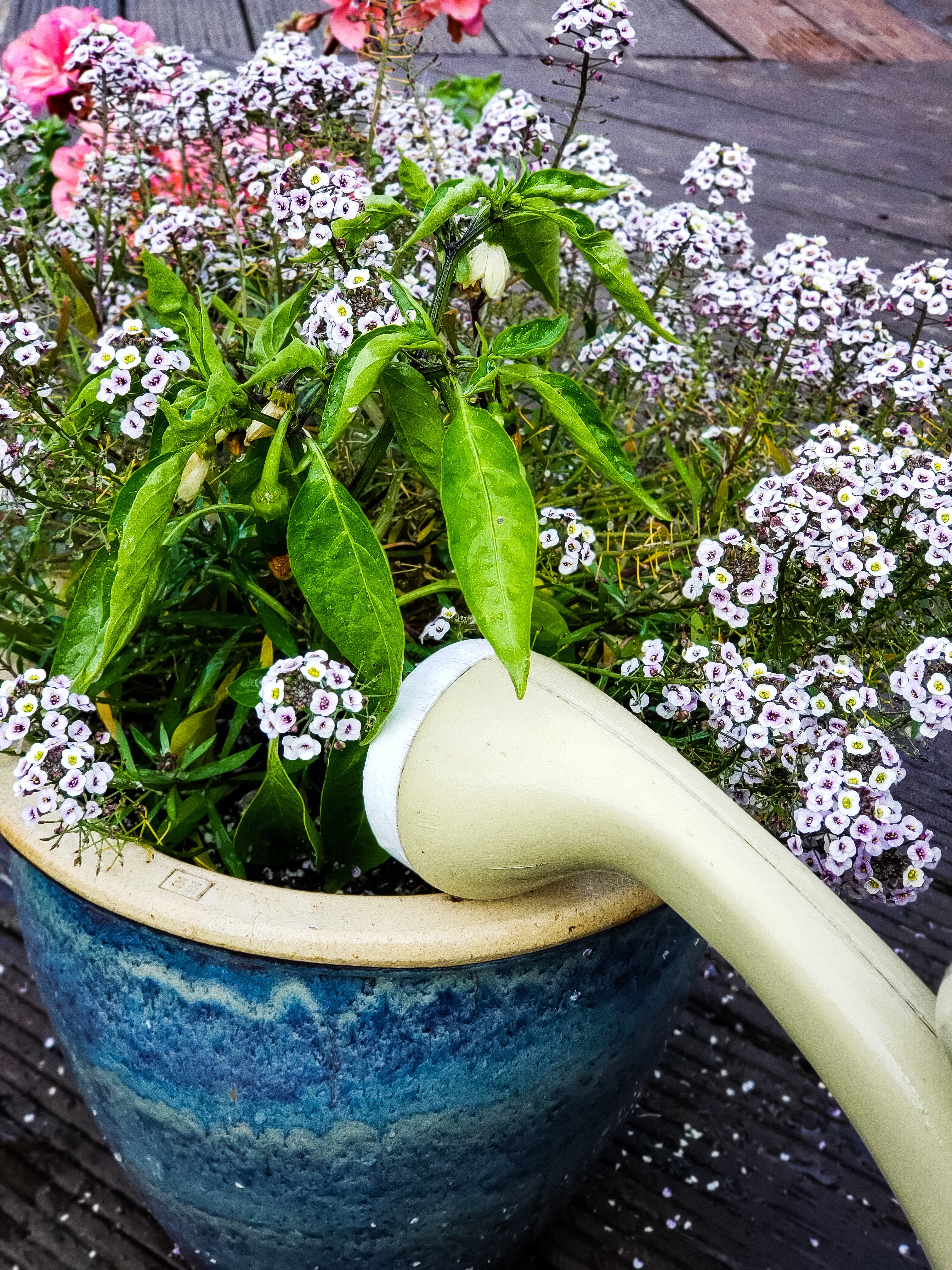 Watering by Hand for Container Gardens

Some people like to water by hand. I do for some things here on my homestead. Anything in pots, hanging baskets and few herb areas. A little in my flowerbeds…the ones that tend to just need a little bit more water than they’re getting.

The majority of my flower beds I don’t water at all. One thing I love about perennials, and why I tend to grow a lot of them, is that once they’re established and have gone through that first summer after planing, I don’t have to do anything to them other than some pruning, fertilizing or laying down compost or mulch. In the early spring when they’re beginning their growing season, they’re pretty much maintenance free, which is my favorite thing to have. The only exception is if we’re having extreme drought conditions. Then I’ll provide some supplemental watering.

So typically the only thing I’m watering by hand are my containers. If I have a new perennial that’s I’ve recently planted and it’s in its first summer here, I’ll do a bit of watering by hand just to make sure it makes it through the season and gets established well.

There have been a few times where my echinacea has gotten a bit too warm and went too long without having any type of rainfall, so I’ll give it a drink, but that’s rare.

Those are the three ways we water here on our homestead and have been the easiest to put in and maintain. No matter which way that you choose to water your garden I have found that I prefer to do a deeper watering just like I talked about earlier with the soaker hoses on the tomatoes. I found it’s just better for the plants and myself. I can do a good deep soaking type watering a few times a week rather than trying to do a small amount here or there, the plants respond better to it and I get a better harvest. The plants are just healthier overall.

There you have it, my favorite and the best way to water the vegetable garden in summer. What’s yours?

8 Common Mistakes Made by New Gardeners

How to Grow Elderberries & Planting Tips

How to Keep Weeds Out of the Garden Naturally